Guardians of Power: The Myth of the Liberal Media (Hardcover) 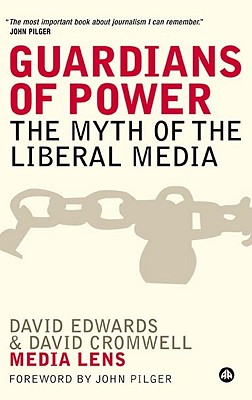 Guardians of Power: The Myth of the Liberal Media (Hardcover)

"Guardians of Power ought to be required reading in every media college. It is the most important book about journalism I can remember."
- John Pilger

"Regular critical analysis of the media, filling crucial gaps and correcting the distortions of ideological prisms, has never been more important. Media Lens has performed a major public service by carrying out this task with energy, insight, and care."
- Noam Chomsky

"Media Lens is doing an outstanding job of pressing the mainstream media to at least follow their own stated principles and meet their public service obligations. [This is] fun as well as enlightening."
- Edward S. Herman


Can a corporate media system be expected to tell the truth about a world dominated by corporations?

Can newspapers, including the 'liberal' Guardian and the Independent, tell the truth about catastrophic climate change -- about its roots in mass consumerism and corporate obstructionism -- when they are themselves profit-oriented businesses dependent on advertisers for 75% of their revenues?

Can the BBC tell the truth about UK government crimes in Iraq when its senior managers are appointed by the government? Has anything fundamentally changed since BBC founder Lord Reith wrote of the establishment: "They know they can trust us not to be really impartial"?

Why did the British and American mass media fail to challenge even the most obvious government lies on Iraqi weapons of mass destruction before the invasion in March 2003? Why did the media ignore the claims of UN weapons inspectors that Iraq had been 90-95% "fundamentally disarmed" as early as 1998?

This book answers these questions, and more.

Since July 2001, Media Lens has encouraged thousands of readers to email senior editors and journalists, challenging them to account for their distorted reporting on Iraq, Afghanistan, Kosovo, Haiti, East Timor, climate change, Western crimes in Central America, and much more. The responses -- often surprising, sometimes outrageous -- reveal the arrogance, unaccountability and servility to power of even our most respected media.