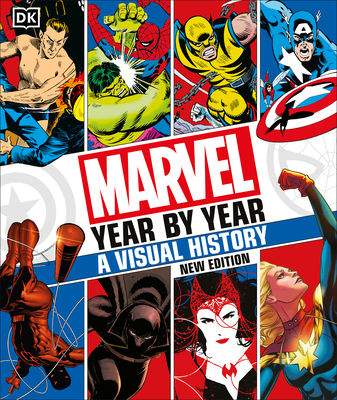 
In Stock—Click for Locations
A new edition of the most comprehensive history of Marvel Comics ever published.

Deep dive into the full story of Marvel Comics in a single, beautifully illustrated volume.

Created in full collaboration with Marvel, this fan-favorite title, last published in 2017, now covers more than 80 years of Marvel history, from the company’s first incarnation as Timely Comics to the multimedia giant it is today.

Packed with artwork from the original comics, this chronological account traces the careers of Marvel Super Heroes such as The Avengers, Spider-Man, Black Panther, Iron Man, Black Widow, and Guardians of the Galaxy, and the writers and artists that developed them. It also charts the real-life events that shaped the times and details Marvel landmarks in publishing, movies, and TV.


© 2022 MARVEL
Author Stephen “Win” Wiacek has worked in all areas of the comics industry since 1981, as a writer, artist, editor and designer. He has taught and lectured on comics creation and production; and worked as a cartoonist, journalist, and consultant for TV and movies. From 1997-2007, he was chairman of the UK's professional body the Comics Creators Guild.

As a freelance copywriter and reviewer, he writes about comics for the Marvel Fact Files partworks, and for books such as Marvel Greatest Comics, Marvel Year By Year: Updated And Expanded, The Ultimate Marvel GuideThe Black Panther Ultimate Guide—all from Dorling Kindersley. In his spare time he encourages people to change their reading habits on his Now Read This graphic novel review blog (www.comicsreview.co.uk/nowreadthis).