Presumed Guilty: What the Jury Never Knew About Laci Peterson's Murder and Why Scott Peterson Should Not Be on Death Row (Paperback) 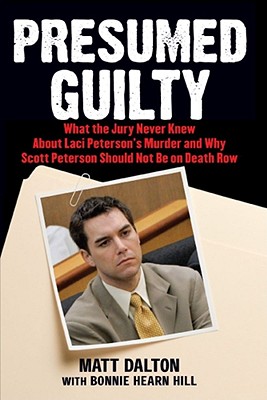 Presumed Guilty: What the Jury Never Knew About Laci Peterson's Murder and Why Scott Peterson Should Not Be on Death Row (Paperback)


Not On Our Shelves—Ships in 1-5 Days
No one knows the story behind the sensational headlines of the Scott Peterson murder trial better than defense attorney Matt Dalton. For six straight months after Peterson's arrest, Dalton was the defense's only full-time investigative attorney on the case. During that time, he lived in Modesto and investigated every element of the case, interviewing scores of witnesses, reviewing more than 35,000 pages of police documents, and meeting almost daily with Scott Peterson in jail.

What he has uncovered will astound even the most informed observers of the Laci Peterson murder case and challenge the most deeply held beliefs about what really happened to Laci Peterson on Christmas Eve, 2002.

This is the first book to go inside the Peterson defense team, and the only book to detail all the evidence that the jury did not hear -- evidence that might have led to Scott Peterson's acquittal, and that will surely play a crucial part in his pending appeals.

Among the revelations in Presumed Guilty:


Compelling, provocative, disturbing, Presumed Guilty is the fascinating story of one lawyer's relentless efforts to find the truth behind one of the most complex and notorious murder cases in American history.
Matt Dalton spent thirteen years as a prosecutor involved in all aspects of criminal litigation with the Long Beach, California City Prosecutor and the Los Angeles County District Attorney. In 2003, he left the DA's office and joined the firm of Geragos & Geragos. Weeks later he met with his first client: accused murderer Scott Peterson. Matt Dalton earned degrees from UCLA and Loyola Law School and, while working as a prosecutor, received commendations for outstanding contributions to domestic violence prosecutions. He is currently in private practice in Los Angeles.

Bonnie Hearn Hill is a California-based writer and a former newspaper editor.