Best Seat in the House: A Father, a Daughter, a Journey Through Sports (Hardcover) 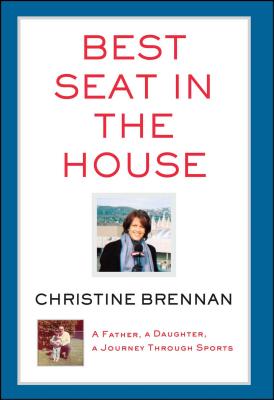 Best Seat in the House: A Father, a Daughter, a Journey Through Sports (Hardcover)

By Christine Brennan
List Price: $53.00
Our Price: $35.00
(Save: $18.00 34%)
In Stock—Click for Locations
From the best-known and most widely read woman sports columnist in the United States comes a remarkable memoir of a father and a daughter, the story of a girl who would turn her love for sports into a trailblazing career.

Christine Brennan grew up in Toledo, Ohio, spending her summers playing with the boys on her block, memorizing baseball statistics, accompanying her dad to countless baseball and football games, and falling in love with everything about sports. While other girls were playing with Barbie dolls, Chris was collecting baseball cards and listening to the radio for the play-by-play accounts of her favorite teams.

The eldest of four children, Chris was her father's daughter from the beginning. For a girl growing up in the 1960s and '70s, in the days before Title IX changed the playing fields of America, there were few opportunities to play organized sports. But Jim Brennan encouraged his daughter to believe she could play anything she wanted to, and when she couldn't be on the field, he was by her side in the stands -- she always thought the seat next to her father was the best seat in the house -- usually cheering for the underdog, and making sure Chris knew there was a place for her in the world of sports.

In her warm and inspiring memoir, the first of its kind by a female sports journalist, Brennan takes readers from her neighborhood ball fields to the press boxes and locker rooms of stadiums around the world. Guided by her father's unfailing sense of loyalty, honor, and fairness, at the age of twenty-two she became the first female sportswriter for The Miami Herald, and in 1985 was the first woman to cover the Washington Redskins as a staff writer for The Washington Post.

Over the past quarter century, Brennan has reported on many of the biggest stories in sports, and led the coverage of both the 1994 Tonya Harding-Nancy Kerrigan saga and the pairs figure-skating scandal at the 2002 Salt Lake Olympics. Her USA Today column on Augusta National Golf Club, home of the Masters, triggered a nationwide debate about the club's lack of female members.

Told in the spirited, friendly voice that readers of her column have come to love, Best Seat in the House is the heartwarming chronicle of a girl who came of age as women's sports were coming of age, encouraged every step of the way by her beloved father.
Christine Brennan, a USA Today columnist, has twice been named one of the nation's top ten sports columnists by the Associated Press Sports Editors. She is also a commentator for ABC News, ESPN, and NPR. Her national bestseller Inside Edge: A Revealing Journey into the Secret World of Figure Skating was named one of the top 100 sports books of all time by Sports Illustrated. Brennan lives in Washington, D.C. Please visit her website, www.christinebrennan.com.
"Before kids love sports, they love their fathers. If they're lucky, they learn to appreciate one through the other. Chris Brennan was lucky. This ode to her father is a wonderful tale of the heart. You feel the magic of sports - and fathers - within its pages. --Mitch Albom, columnist, Detroit Free Press; panelist, ESPN Sports Reporters

"Award-winning sports journalist Christine Brennan has taken on the boys for years -- and won. Now in BEST SEAT IN THE HOUSE, she tells the story behind her success, a story that will resonate with millions of girls and women and their supportive dads. From playing baseball with her father in the backyard in the 1960's to fighting for Title IX in the 21st Century, Brennan tells a riveting tale of coming of age just as women's sports were coming of age. And like so many others, her father was her guide throughout the journey. Both a tribute and a memoir, Christine Brennan's story makes for compelling reading." --Billie Jean King

"Christine Brennan, already one of the most accomplished sportswriters in America, raises her game to a whole new level. Best Seat in the House is equal parts personal memoir and love letter to a recently deceased dad who will never really be gone. This is a book for any sports fan. More important, though, it is for anyone who cares about the power and beauty of relationships at their best, anyone who cares about the passion and purpose of a life well-lived." -- Jeffrey Marx, author of the New York Times best-seller Season of Life and winner of the Pulitzer Prize

"What I love about reading Christine Brennan's work is that she's right on, she goes straight to the heart of the problem and she's not afraid to take on the toughest issues in sports today: steroids, the NFL, Augusta National, Olympic scandals. In "Best Seat in the House," Christine tells us the reason why she is so willing to take huge risks -- because of the life lessons she learned from her father. Christine has written a wonderful remembrance of the man who shaped her life. It's a heart-warming Father's Day story every father and daughter -- indeed, every sports fan -- will enjoy." -- Donna de Varona, two-time Olympic gold medalist, ABC Sports commentator and women's sports advocate

"Chris Brennan has always taken the tough stance. On a compass, she is our True North. As usual, she turns every double play in this remarkable trip through her childhood and award-winning career. It will make you wish you grew up in Toledo." --Lesley Visser, CBS Sportscaster

"A wonderful book. Part daughter-father memoir, part coming of age story, part an account of the rise of women in sports in the United States, by a true woman sportswriting pioneer. The book has an optimistic, life-affirming spirit and a commendable absence of rancor. It's a winner." -- Rem Rieder, editor and senior vice president, American Journalism Review

"Christine Brennan's exuberant USA Today columns have always taken sports fans beyond the narrow field, court and rink. Now, thanks to Brennan's "Best Seat in the House," we see where she got that sharp eye for connections between sports and larger truths. It turns out her whole life, from backyard baseball in Toledo to battles with the White House, is testament to games' power to do good." --Kevin Modesti, Los Angeles Daily News sports columnist

"If we're lucky, my daughter will turn out half as passionate about sports as Christine Brennan, and I'll be half as wise as her dad." -- Rick Reilly, Sports Illustrated columnist and author of the New York Times best-seller Who's Your Caddy?

"Christine Brennan's book takes us along for her unique and pioneering journey from Toledo to The Washington Post and USA Today to television and beyond, [and] grants us a detailed look at how a daughter of the Midwest was able to open so many doors locked to her and all women who dared to love sports in pre-Title IX times. Hopefully, young women by reading this book, will come to understand how much Christine did and endured to guarantee their inclusion." --Michael Wilbon, Washington Post sports columnist and co-host of ESPN's "Pardon the Interruption"