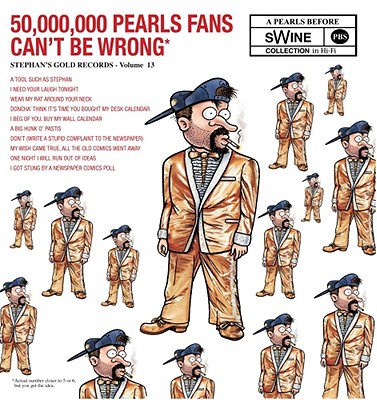 This is book number 13 in the Pearls Before Swine series.

Cartoonist Stephan Pastis's 50,000,000 Pearls Fans Can't Be Wrong is one collection that's destined for the top of the charts. It's pure gold, packed with smart, sharp, and painfully honest comic strips that will rock readers with their clever insights into the human soul.

Pearls Before Swine is Pastis's hilarious comic strip tale of two friends: arrogant, egotistical, "hound dog" Rat, and slow-witted, painfully naive, "teddy bear" Pig. Along with Zebra, the "jailhouse rock" activist; Goat, the "treat me nice" reluctant brain; and the "heartbreak hotel" carnivorous Crocs, Pearls delightfully mocks the flaws and shortcomings of human nature. Ladies and gentlemen, the King has left the building.
Stephan Pastis is an attorney turned cartoonist. A graduate of the University of California, Berkeley, and the UCLA School of Law, he worked as a lawyer before trying his hand at cartooning. Pastis lives in the Bay Area with his wife and two children.