Stop and Smell the Roses: A Mutts Treasury (Paperback) 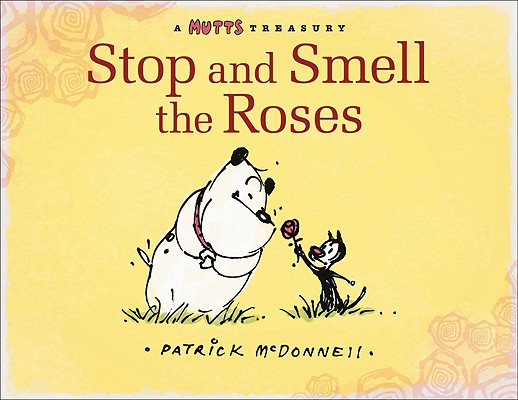 Stop and Smell the Roses: A Mutts Treasury (Paperback)

This is book number 18 in the Mutts series.

Patrick McDonnell is a major animal welfare advocate. He's also a prominent proponent of funny and a keen observer of the small, everyday moments that make up our lives. Stop and Smell the Roses: A Mutts Treasury is a collection of dailies and Sundays of the adventures of McDonnell's dynamic dog and cat duo.

* "Patrick McDonnell's Mutts is up there with Peanuts, Pogo, Krazy Kat, and Calvin and Hobbes--cartoons that are smart and funny, brilliantly drawn and full of heart." --Matt Groening, creator of The Simpsons

* McDonnell was awarded Germany's Max and Moritz Award for best international comic strip and the Adamson Statuette from the Swedish Academy of Comic Art for Best International Comic Strip Artist. Mutts was also honored with the Genesis Award for highlighting animal welfare issues.

* Mutts characters are featured on special New Jersey license plates to raise funds for low-cost spaying and neutering.
Patrick McDonnell is a New York Times bestselling author and the recipient of multiple awards from the National Cartoonists Society for Outstanding Cartoonist of the Year and Newspaper Strip of the Year. A dedicated animal advocate and Genesis Award recipient, McDonnell regularly lends his talents to animal-protection groups and issues, including The Humane Society of the United States, where he serves on the national board of directors. McDonnell is also on the board of directors of the Charles M. Schulz Museum. He resides in New Jersey.