Ignorance, Thy Name Is Bucky: A Get Fuzzy Collection (Paperback) 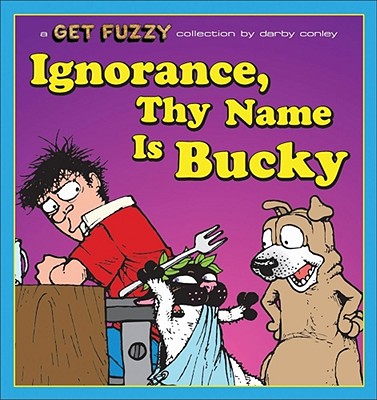 Ignorance, Thy Name Is Bucky: A Get Fuzzy Collection (Paperback)

This is book number 13 in the Get Fuzzy series.

Chances are the warm fuzzies aren't what you will get when you pick up Ignorance, Thy Name Is Bucky. Instead, you'll get LOL moments as Darby Conley pumps hilarity into living the single life with pets.

The family portrait: Rob Wilco, the tallest member of the family, is a single, mild-mannered ad executive who pays the bills and often the price, thanks to his curious and anthropomorphic housemates. Rob gives guidance and all sorts of "material" to Bucky, a temperamental cat, who clearly wears the fur pants in the family. Satchel, a good-hearted pooch, plays neutral, but usually ends up on the receiving end of Bucky's mischief.

"Thanks for Get Fuzzy, the funniest comic strip on planet Earth. Sweet-natured Satchel Pooch and the utterly crazed Bucky B. Katt are much more fun than Odie and Garfield." --Stephen King, Entertainment Weekly

* Recognized as Best Comic Strip in 2002 by the National Cartoonists Society.
Get Fuzzy first appeared in newspapers in 1999. Darby Conley lives in Boston, with four cats and three boxes of Band-Aids.