Take Our Cat, Please: A Get Fuzzy Collection (Paperback) 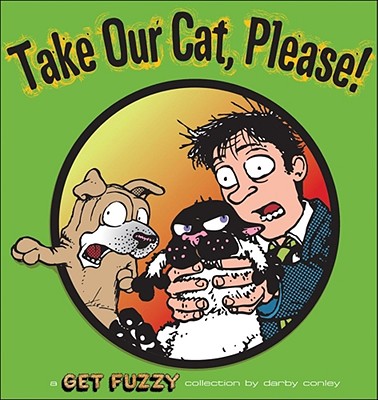 Take Our Cat, Please: A Get Fuzzy Collection (Paperback)

This is book number 11 in the Get Fuzzy series.

The humor is a wickedly authentic blend of young-professional-bachelor shtick and pets-from-hell high jinks. . . . And, perhaps best of all, the strip keeps getting better." -Milwaukee Journal-Sentinel

Get Fuzzy was named Best Comic Strip of the Year in 2002 by the National Cartoonists Society.

Satchel, the Shar-pei-Lab mix in the Get Fuzzy family who actually believes what TV commercials say, and his owner-housemate Rob Wilco, a single, somewhat befuddled, Red Sox-obsessed ad exec, endure the scourge of their daily existence, Bucky Katt. Whether baiting the ferret down the hall for battle, gorging on rubber bands (and the ensuing gastric consequences), or joining the gun repair club, Bucky continuously tests the patience and endurance of his hapless mates.

Three Get Fuzzybooks, Bucky Katt's Big Book of Fun, Blueprint for Disaster, and Say Cheesy, have been New York Times best-sellers.
Get Fuzzy first appeared in newspapers in 1999. Darby Conley lives in Boston, with four cats and three boxes of Band-Aids.