I'm Ready for My Movie Contract: A Get Fuzzy Collection (Paperback) 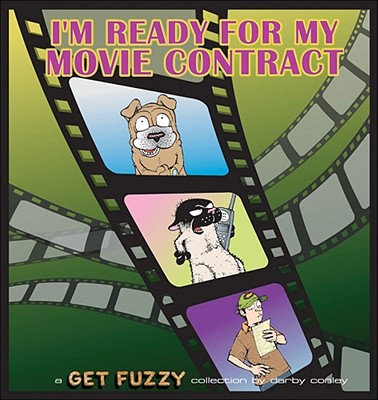 I'm Ready for My Movie Contract: A Get Fuzzy Collection (Paperback)

This is book number 10 in the Get Fuzzy series.

So far this century, there have arguably been three breakout hits on the comics page-The Boondocks, Get Fuzzy, and Pearls Before Swine." -San Francisco Chronicle

* Get Fuzzy was named Best Comic Strip of the Year in 2002 by the National Cartoonists Society and now appears in more than 500 newspapers worldwide.

Satchel, the ever-hapless Shar-pei-Lab mix in the Get Fuzzy gang, is the star of I'm Ready for My Movie Contract: A Get Fuzzy Collection, inspired by his hero, Wonder Mutt. Rounding out this not-so-warm-and-fuzzy cast is Rob Wilco, a single, mild-mannered ad exec, and Bucky Katt, a highly strung, bucktoothed, laid-back-eared Siamese with an eye for mischief, an obsession with monkey pizza, and a neurotic fear of beavers. Together they form one crazy troupe for fun and mayhem.

* Three books, Bucky Katt's Big Book of Fun, Blueprint for Disaster, and Say Cheesy, have been New York Times best-sellers.
Get Fuzzy first appeared in newspapers in 1999. Darby Conley lives in Boston, with four cats and three boxes of Band-Aids.