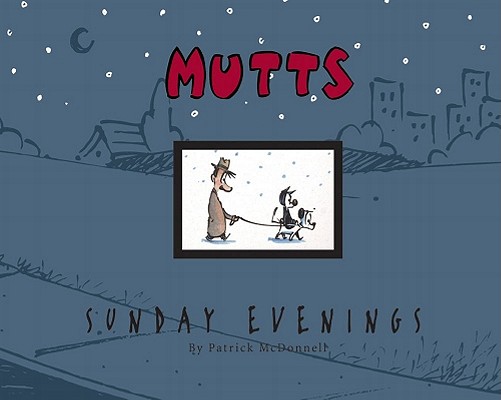 This is book number 14 in the Mutts series.

Patrick McDonnell's MUTTS is up there with Peanuts, Pogo, Krazy Kat, and Calvin and Hobbes-cartoons that are smart and funny, brilliantly drawn and full of heart." -Matt Groening, creator of The Simpsons

Readers of all ages have a variety of reasons why they love the daily comic strip MUTTS. But for some readers, Sunday is the most special day of the week because it is the day that cartoonist Patrick McDonnell unleashes his full-color Sunday strips.
Those Sunday-loving readers are in for a real treat with the release of Sunday Evenings. This new MUTTS treasury is the fourth in the "Sunday" series and stars Earl the dog and Mooch the cat, who despite their obvious differences prefer to tackle life as a mostly harmonious partnership.

Under the skilled pen of cartoonist Patrick McDonnell, MUTTS is about far more than the simple, carefree world of pets. Underneath the banter of its endearing characters, the reader often faces the all-too-real concerns of animals and life on the planet Earth. It's what makes this book such a rich and enjoyable experience, one that readers will savor each time they page through the collection.
Patrick McDonnell is a New York Times bestselling author and the recipient of multiple awards from the National Cartoonists Society for Outstanding Cartoonist of the Year and Newspaper Strip of the Year. A dedicated animal advocate and Genesis Award recipient, McDonnell regularly lends his talents to animal-protection groups and issues, including The Humane Society of the United States, where he serves on the national board of directors. McDonnell is also on the board of directors of the Charles M. Schulz Museum. He resides in New Jersey.