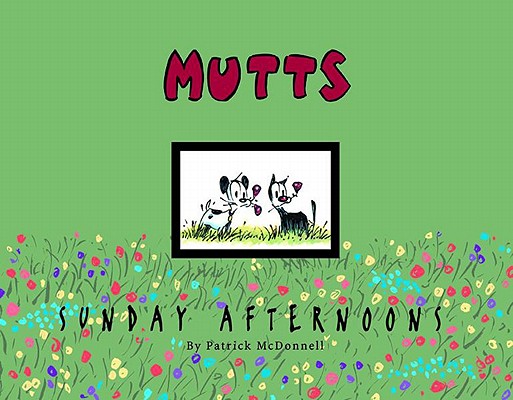 This is book number 11 in the Mutts series.

MUTTS is, to put it simply, the best comic strip produced in North America today." -The Infodad Page's five-star review

Giant events, earth-shaking themes, complex issues...all of these can make for captivating cartoons. But it's the artist who can take the simple, keep it simple, and still tell a story that really stands apart from the crowd. Patrick McDonnell, creator of MUTT's Mooch the cat and Earl the dog, is such a cartoonist.

The quickest way to absorb McDonnell's mastery of his art is to pick up this third MUTTS treasury, in which frame after frame and strip after strip he consistently displays his wit, cleverness, and ability with a pen. Mutts is the perfect way to escape into what appears to be an easygoing, carefree world. But just beneath the characters' banter and endearing mannerisms are the universal concerns of animals and people alike. The cartoonist's sparing style and gentle humor invites readers to fill out the frames with their own imaginations.

Nationally, McDonnell has received awards ranging from Outstanding Cartoonist of the Year to Newspaper Comic Strip of the Year. He has also received such worldwide praise as being named the Swedish Academy of Comic Art's Best International Comic Strip Artist. This strip's a winner the world around!
Patrick McDonnell is a New York Times bestselling author and the recipient of multiple awards from the National Cartoonists Society for Outstanding Cartoonist of the Year and Newspaper Strip of the Year. A dedicated animal advocate and Genesis Award recipient, McDonnell regularly lends his talents to animal-protection groups and issues, including The Humane Society of the United States, where he serves on the national board of directors. McDonnell is also on the board of directors of the Charles M. Schulz Museum. He resides in New Jersey.