Blueprint for Disaster: A Get Fuzzy Collection (Paperback) 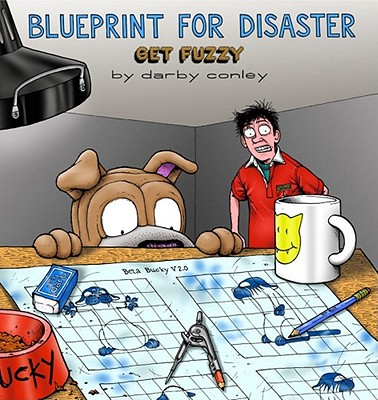 Blueprint for Disaster: A Get Fuzzy Collection (Paperback)

This is book number 5 in the Get Fuzzy series.

You have to wonder what kind of pets cartoonist Darby Conley had as a child. If they were anything like Bucky Katt and Satchel Pooch. . . well, life in the Conley house must have been interesting to say the least. The wacky triumvirate of Bucky, Satchel, and Rob are back in this Get Fuzzy collection,
Rob Wilco is the mild-mannered ad executive caretaker of Bucky and Satchel. Satchel is a sweet and naïve shar-pei-yellow-Lab cross, while Bucky is a Siamese with "cat-titude" to spare. Bucky and Satchel get along like, well, like cats and dogs. Like a beleaguered parent, Rob constantly must thwart Bucky's schemes and protect the unsuspecting Satchel. His pets' mischief continually disrupts his attempts to meet women. You try explaining to your date why your cat thinks he's a gangsta rapper and your dog is filming his ";crib" for MTV. Would anyone live with humans who behaved like this?

Bitingly funny with a wry sense of the absurdity of life with pets, Get Fuzzy appeals to everyone who has ever lived in a mixed-species household.
Get Fuzzy first appeared in newspapers in 1999. Darby Conley lives in Boston, with four cats and three boxes of Band-Aids.