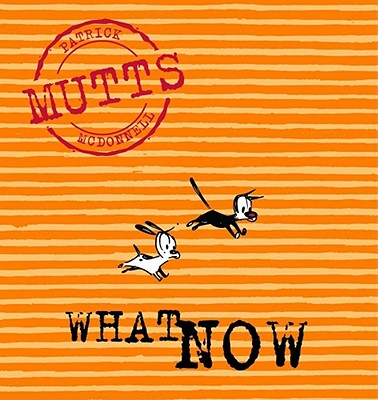 This is book number 7 in the Mutts series.

""MUTTS is the real thing, a comic strip that can touch, amuse and astound all at the same time.""-Riverfront Times

What Now? chronicles the humorous happenings of Earl the dog and his feline friend Mooch. As usual, the endearing pair can be counted on for laughs and charming adventures. In this collection, Mooch professes his love . . . for a little pink sock.

""How can I take you seriously with a little pink sock in your mouth?"" asks Earl.
""This from a guy who wears a 'Shnoopy' collar,"" retorts Mooch.

Mooch's affection for his sock is so deep, he sings little songs about it. But the love affair comes to an abrupt end when his pal Earl buries it to try to end the obsession. Fortunately for Mooch, socks come in pairs, and he's soon reunited with ""its twin sister.""

Earl and Mooch put their comic spin on a wide range of subjects, from napping and poetry to summer vacations and Christmas anticipations. Interspersed with its charming humor are more weighty messages on issues important to McDonnell, such as animal shelters, saving our endangered species, and other animal-protection topics.

What Now? delivers creative style and the charm of yesteryear unlike any other strip on the funny pages today.


Patrick McDonnell is a "New York Times" best-selling author and the recipient of multiple awards from the National Cartoonists Society for Oustanding Cartoonist of the Year and Newspaper Strip of the Year. A dedicated animal advocate and Genesis Award recipient, McDonnell regularly lends his talents to animal-protection groups and issues, including The Humane Society of the United States, where he serves on the national board of directors. McDonnell is also on the board of directors of the Charles M. Schulz Museum. He resides in New Jersey. "