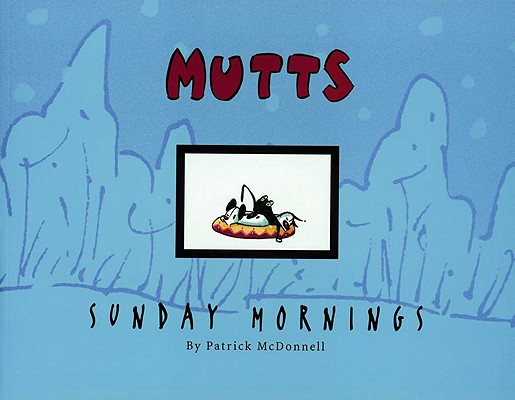 This is book number 8 in the Mutts series.

This book is a delight. The colors are delicately applied, a visual feast. In short, not only is this tome exemplary of the cartoonist's art, it is similarly an exemplar of the printer's. A well-made book." - Comics Buyer's Guide, on MUTTS' first Sunday treasury, MUTTS Sundays

MUTTS is known for its straight-forward, delightful artwork, its positive messages, and, of course, the antics of its charming furry protagonists, Earl the dog and Mooch the cat. But MUTTS has also garnered praise for its creative and colorful Sunday strips.

Sunday Mornings is a collection of MUTTS Sunday strips hand-picked by creator Patrick McDonnell. Monday through Saturday, readers of every generation have wide-ranging reasons why they love MUTTS. But Sunday is a special visual adventure. The logo panel is almost a strip unto itself, often paying homage to cartooning of yesteryear, with Mooch and Earl in a comic book cover tribute or parodying a strip from decades gone by. Some readers may have never seen the logo panel, since they are sometimes dropped for space. Those cheated readers, as well as those who have come to love MUTTS' special Sunday full-color strips, will cherish this vibrant collection.
Patrick McDonnell is a New York Times bestselling author and the recipient of multiple awards from the National Cartoonists Society for Outstanding Cartoonist of the Year and Newspaper Strip of the Year. A dedicated animal advocate and Genesis Award recipient, McDonnell regularly lends his talents to animal-protection groups and issues, including The Humane Society of the United States, where he serves on the national board of directors. McDonnell is also on the board of directors of the Charles M. Schulz Museum. He resides in New Jersey.