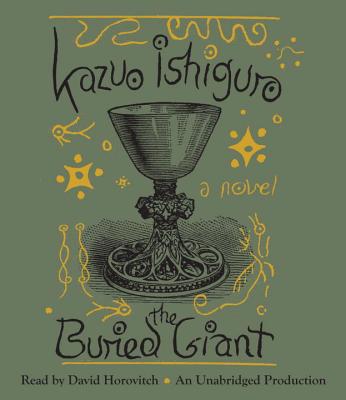 “Ishiguro's new novel is a work of wonder, transport, and beauty. A recurrent theme in his earlier books, always shown with great originality, is the matter of what happens after we have lost our way. In The Buried Giant, Ishiguro explores losing direction, memory, and certainty, as the primary characters cling to remnants of codes of behavior and belief. Which is the way through the forest? Where might our son be? And where is the dragon, and who shall seek to slay her? Set in the time just after King Arthur's reign, Ishiguro's tale, with striking, fable-like rhythm and narrative, shows how losing and finding our way runs long, deep, and to the core of things.”
— Rick Simonson, The Elliott Bay Book Company, Seattle, WA

The Romans have long since departed and Britain is steadily declining into ruin. But, at least, the wars that once ravaged the country have ceased. Axl and Beatrice, a couple of elderly Britons, decide that now is the time, finally, for them to set off across this troubled land of mist and rain to find the son they have not seen for years, the son they can scarcely remember. They know they will face many hazards--some strange and otherworldly--but they cannot foresee how their journey will reveal to them the dark and forgotten corners of their love for each other. Nor can they foresee that they will be joined on their journey by a Saxon warrior, his orphan charge, and a knight--each of them, like Axl and Beatrice, lost in some way to his own past, but drawn inexorably toward the comfort, and the burden, of the fullness of a life's memories. Sometimes savage, sometimes mysterious, always intensely moving, Kazuo Ishiguro's first novel in a decade tells a luminous story about the act of forgetting and the power of memory, a resonant tale of love, vengeance, and war. From the Hardcover edition.
KAZUO ISHIGURO was born in Nagasaki, Japan, in 1954 and moved to Britain at the age of 5. He is the author of 6 novels: A Pale View of Hills (1982, Winifred Holtby Memorial Prize), An Artist of the Floating World (1986, Whitbread Book of the Year Award, Premio Scanno, shortlisted for the Booker Prize), The Remains of the Day (1989, winner of the Booker Prize), The Unconsoled (1995, winner of the Cheltenham Prize), When We Were Orphans (2000, shortlisted for the Booker Prize) and Never Let Me Go (2005, Corine Internationaler Buchpreis, Serono Literary Prize, Casino de Santiago European Novel Award, shortlisted for the Booker Prize). Nocturnes (2009), his connected stories collection, was awarded the Giuseppe Tomasi di Lampedusa International Literary Prize. In 1995 Ishiguro received an OBE for Services to Literature and in 1998 the French decoration of Chevalier de L'Ordre des Arts et des Lettres.