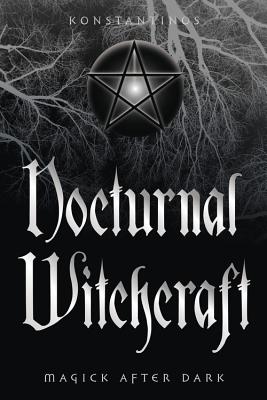 The Powers of Night
Nocturnal Energies differ from those of Daylight and Witches have long known how to take advantage of Lunar Powers and the spiritual entities that prefer the darkness for particular magical operations.

This innovative book explores special techniques for working with the Night Powers and the subtle effects of dark symbols to:

You will learn to find your Inner Quiet, Read Minds through the Ether, Dream for Change, Create and Use Thought Forms, Alter Reality through simple Spells and Rites, and use the powers of Magnetism and Suggestion. And you will Explore the Mysteries of Death and to Speak with the Dead.

The Dark balances the Light. Do not fear it but equally embrace it.

Konstantinos is a recognized expert on occult, new age, and paranormal topics. He has a bachelor's degree in journalism and technical writing from New York Polytechnic Institute. He is a published author of articles and short fiction which have been featured in numerous publications including Popular Electronics, The Spook, and FATE Magazine. Konstantinos is a popular lecturer at colleges and bookstores in the New York City area and has appeared on CNBC's After Hours and The Ricki Lake Show. He is the author of Vampires: The Occult Truth, Summoning Spirits The Art of Magical Evocation, Speak with the Dead: 7 Methods for Spirit Communication, Gothic Grimoire, Nocturnal Witchcraft, Nocturnicon: Calling Dark Forces and Powers, and Werewolves: The Occult Truth.