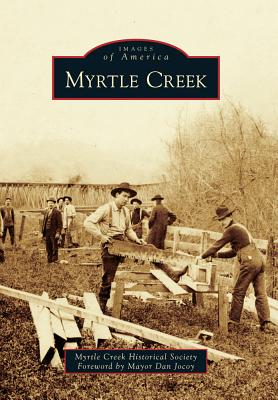 
Special Order—Subject to Availability
The Scott-Applegate Trail, the first route through Southern Oregon, crossed Myrtle Creek where it flows into the South Umpqua River. The gold rush of 1849 and the subsequent discovery of gold in Southern Oregon sent waves of miners down this trail in their quest for gold. Attracted by Myrtle Creek's rich and picturesque valleys, many returned to file their land claims here. Stores and mills were built to supply the gold miners, and the town rapidly grew to be an important stop along the route. Myrtle Creek incorporated as a city in 1893, and prosperity followed. A thriving prune industry, truck farms, gold mines, and lumber mills nurtured the economy until the Depression. Following World War II, a burgeoning population fueled by an exploding timber industry made Myrtle Creek a boomtown for many years. When Interstate 5 bypassed Myrtle Creek in 1965, the area took on the charm of a quiet country town--a safe place to raise children or retire in comfort.