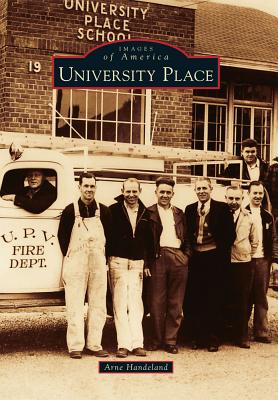 
Special Order—Subject to Availability
A community located just south and west of Tacoma, University Place has always been noted for its excellent school system--but where is the university? In the 1890s, long before University Place became a suburban bedroom community, it was chosen as the future site for Puget Sound University. Plans were drawn and ground breaking even occurred, but the economic depression of the mid-1890s scuttled the venture; however, the name University Place stuck. At approximately the same time the university was planned, the few residents in the area formed school district No. 83, encompassing approximately eight square miles along the shore of Puget Sound, and named it University Place School District. From the days of sheep herding, logging, gravel and sand mining, tomato farming, apple and peach orchard planting, and rhododendron farming, University Place has become a proud city with a population exceeding 31,000 residents.