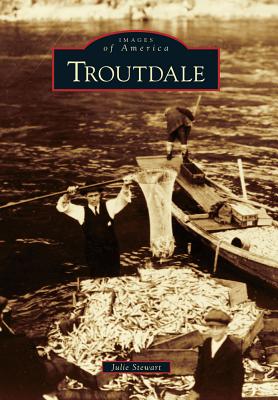 
Special Order—Subject to Availability
As a link on the Wire Trail, which was a Native American route between Celilo and Willamette Falls, Troutdale was first a site for Chinook Indian encampments. Its locale was connected to westward expansion as a landing place for Lewis and Clark and as one of the initial stops for immigrants fresh off the Oregon Trail. Troutdale's pioneers wrestled with its thick forests, rocky basalt cliffs, and the fierce east wind that funneled down from the Columbia River Gorge. Despite these obstacles, they created a community with a colorful and serendipitous history that included record-setting smelt runs, paralyzing ice storms, and being named as the celery capital of the world. Troutdale transformed as its main street evolved from a dirt road into the first paved highway in the Pacific Northwest. This, coupled with the arrival of the railroad, has made it a gateway for tourists, day-trippers, and exuberant photographers seeking jaw-dropping vistas of the Columbia River Gorge Scenic Area.