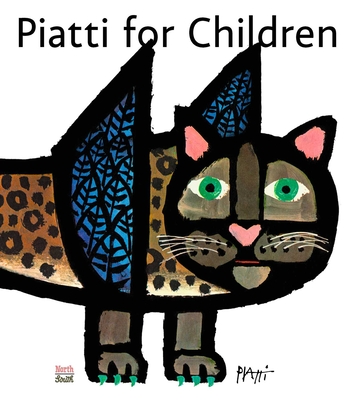 
On Our Shelves Now at:
Beloved Swiss designer Celestino Piatti’s fun and retro children’s picture books—all seven combined in one volume for the first time—make this collection a visual treat for the whole family!

Celestino Piatti is one of Switzerland’s most famous artists. The designer of thousands of posters and book covers made Piatti an icon. The owl was his hallmark, as was his graphic style with its distinctive black lines. Piatti also painted for children. He illustrated seven picture books at the height of his career. For the first time they are all gathered in a high-quality volume: Animal ABC, Barbara and the Dormouse, The Happy Owls, The Little Crayfish, Circus Nock (The Circus Family), The Golden Apple, and Holy Night.

Celestino Piatti (1922–2007) was a Swiss graphic artist, painter, and book designer, born in Wangen near Zurich, Switzerland. The trained graphic artist was a popular illustrator of children’s books and gained international fame thanks to the more than 6,300 book titles that he designed for Deutscher Taschenbuch Verlag (DTV) from 1961 onwards. Piatti also designed posters, postage stamps, stained glass, murals, and iron sculptures, and he worked as a writer and caricaturist. His work has received several awards. Although he used a wide variety of techniques, his style—black outlines and vivid colors—was always unmistakable.

Celestino who? You may not know the name of this influential Swiss designer and graphic artist, who died in 2007. You may not have seen his work directly, but you have seen echoes of his bold line and bolder colors everywhere in midcentury advertising and illustration. In 1961, already famous for his posters, he became the chief designer for the Munich publishing house Deutscher Taschenbuch Verlag, for which he would create more than 6,300 covers, each instantly recognizable for the contrast between Piatti’s clever graphics and the utilitarian, sans-serif Akzidenz-Grotesk typeface he favored—an epic feat of branding. His illustrations often had a dashed-off, even child-like verve. That was deceptive, of course, but it made his style perfect for picture books. It’s a shame he illustrated only seven. They’re all beauties, however, and have now been collected for the first time as Piatti for Children by NorthSouth Books, the English-language imprint of a Swiss children’s publisher. American readers may see an affinity between Piatti and his contemporary Eric Carle, who also started out in advertising before, in Carle’s case, making children’s books his lifework. It’s not bad training, given that a certain refined directness distinguishes both first-rate commercial art and a first-rate picture book. But the latter also needs a good dose of wit or mystery or both to really engage a kid’s imagination, and Piatti’s illustrations have all that in abundance—he reaches out, then lures you in. As he once said of his favorite bird, “You can draw an owl a thousand times, and never find out its secret.” In that effort is his spark.
— Bruce Handy