In My Dreams I Can Fly (Hardcover) 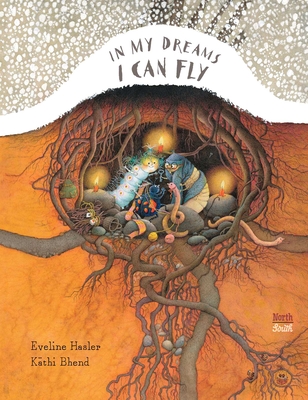 In My Dreams I Can Fly (Hardcover)


In Stock—Click for Locations
"A ­wonderfully pleasing picture book that could be used in a preschool sessions ­covering the seasons." - School Library Journal

Below the ground, five friends—a grub, a beetle, two worms, and a caterpillar—are settling in for the winter. But what will they do all winter long? What will they eat? What will they dream of? This charming book offers some surprising answers. Eveline Hasler and Käthi Bhend have collaborated on an imaginative tour de force that will delight young and old alike.
Eveline Hasler, born in Glarus, Switzerland, studied psychology and history in Friborg and Paris. She also worked as a teacher. Her many books for children are known throughout the world and have been honored with numerous international awards. Today Eveline lives and works in Switzerland, writing poetry and narrative works for adults.

Käthi Bhend was born in Olten, Switzerland. She studied commercial art and worked in advertising for several years. After winning a competition held by a Swiss publisher, she began illustrating children’s books. Among other honors, her work was awarded the Premio Grafico award at the Bologna Children’s Book Fair and received the Swiss Youth Book Prize in the same year (1990). Käthi has a passion for literature, art, music, and last but not least gardening. In 2019, Käthi was one of twenty-six Swiss artists honored at Switzerland’s host country appearance in Bologna. Today she lives in Heiden, Switzerland.
"A simple story spreads like frosting over weighty themes."
— Kirkus Reviews

"The overall feeling is one of depth, and not just because the book takes place underground; it offers much to pore over and contemplate."
— Publishers Weekly