A Garden of Creatures (Hardcover) 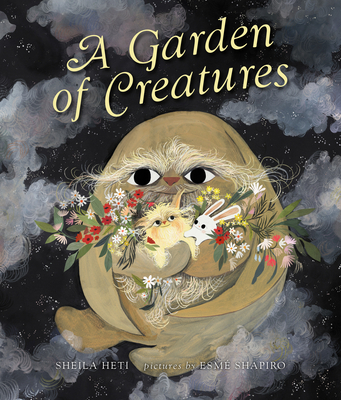 A Garden of Creatures (Hardcover)


On Our Shelves Now at:
A tender and deeply moving picture book about loss and the big questions it leaves behind from New York Times bestselling author Sheila Heti and acclaimed illustrator Esmé Shapiro.

Two bunnies and a cat live happily together in a beautiful garden. But when the big bunny passes away, the little bunny is unsure how to fill the void she left behind. A strange dream prompts her to begin asking questions: Why do the creatures we love have to die, and where do we go when we die? How come life works this way? With the wisdom of the cat to guide her, the little bunny learns that missing someone is a way of keeping them close. And together they discover that the big bunny is a part of everything around them -- the grass, the air, the leaves -- for the world is a garden of creatures.

With its meditative text, endearing illustrations and life-affirming message, A Garden of Creatures reveals how the interconnectedness of nature and the sweetness of friendship can be a warm embrace even in the darkest times.
SHEILA HETI is the internationally acclaimed author of the novel Motherhood, which was shortlisted for the Scotiabank Giller Prize and named a Best Book of the Year by the New York Times, Vulture, NPR, and Chicago Tribune, among others. She also wrote How Should a Person Be?, which was named a New York Times Notable Book as well as the story collection The Middle Stories and the novel Ticknor, which was a finalist for the Trillium Book Award. She was a lead writer and editor for the anthology Women in Clothes, a New York Times bestseller and was named one of "The New Vanguard" by the New York Times; a list of fifteen women writers from around the world who are "shaping the way we read and write fiction in the 21st century." Her books have been translated into twenty-two languages. Sheila lives in Toronto.

ESMÉ SHAPIRO grew up in Laurel Canyon, California and Ontario, Canada. A graduate of The Rhode Island School of Design, Esmé is a past recipient of both the Nancy Lee Rhodes Roberts Scholarship and The SILA West 53 Gold Award-Phillip Hayes Scholarship. She has previously written and illustrated Ooko, which was nominated for a Governor General's Literary Award in 2016, as well as Alma and the Beast, which received two starred reviews, and, most recently, Carol and the Pickle-Toad. Esmé also illustrated Yak and Dove by Kyo Maclear and Eliza: The Story of Elizabeth Schuyler Hamilton by Margaret McNamara. She has exhibited at The Society of Illustrators, and her work has been featured in Taproot and Plansponsor magazines. Currently she and her dog, Chebini Brown, live in New York's Hudson Valley.
One of CCBC's Best Books for Kids & Teens (Fall 2022), Starred Selection

“The discussions are thoughtful . . . and the vivid illustrations offer the animals a soft place to contemplate and heal. A beautiful and unconventional meditation on loss and love.” —STARRED REVIEW, Booklist

"It's hard to find a non-traditional way of thinking about death, but Heti . . . and Shapiro offer tranquility and solace." —Publishers Weekly

"[A] tender way to consider loss and the uncertainties that arise when a loved one dies." —Sal's Fiction Addiction