The Barren Grounds: The Misewa Saga, Book One (Paperback) 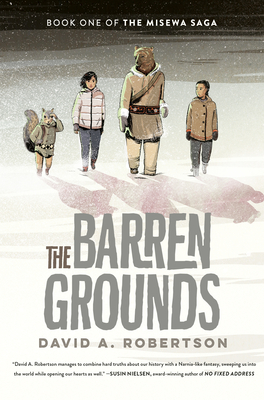 The Barren Grounds: The Misewa Saga, Book One (Paperback)

By David A. Robertson

This is book number 1 in the The Misewa Saga series.

Morgan and Eli, two Indigenous children forced away from their families and communities, are brought together in a foster home in Winnipeg, Manitoba. They each feel disconnected, from their culture and each other, and struggle to fit in at school and at their new home -- until they find a secret place, walled off in an unfinished attic bedroom. A portal opens to another reality, Askí, bringing them onto frozen, barren grounds, where they meet Ochek (Fisher). The only hunter supporting his starving community, Misewa, Ochek welcomes the human children, teaching them traditional ways to survive. But as the need for food becomes desperate, they embark on a dangerous mission. Accompanied by Arik, a sassy Squirrel they catch stealing from the trapline, they try to save Misewa before the icy grip of winter freezes everything -- including them.
DAVID A. ROBERTSON is the author of numerous books for young readers including When We Were Alone, which won the 2017 Governor General's Literary Award and was nominated for the TD Canadian Children's Literature Award. Strangers, the first book in his Reckoner trilogy, a young adult supernatural mystery, won the 2018 Michael Van Rooy Award for Genre Fiction (Manitoba Book Awards). A sought-after speaker and educator, Dave is a member of the Norway House Cree Nation and currently lives in Winnipeg. For more information, visit his website: www.darobertson.ca and follow him on Twitter: @DaveAlexRoberts
A 2021 Governor General’s Literary Award for Young People's Literature Nominee
One of Quill & Quire's Best Books of 2020
Recommended by booksellers on NPR's Code Switch
One of CBC Books' Best Middle-Grade and Young Adult Books of 2020
One of Canadian Children's Book News’ Best Books of 2020
A CBC Books Bestseller

PRAISE FOR The Barren Grounds:

"David A. Robertson has written such a fine, beautiful novel. He manages to combine hard truths about our history with a Narnia-like fantasy, sweeping us into the world of the story while opening our hearts as well." —Susin Nielsen, author of We Are All Made of Molecules and No Fixed Address

“This is a book that is rich in its characterization, evocative in its descriptions, and skillful in its weaving together of traditions of the past and life in the present.” —CM Magazine

“[T]he treatment of Cree culture resonates, and the engaging characters and folklore ensure readers will look forward to the next installment.” —Publishers Weekly

“Reminiscent of C.S. Lewis’s Narnia stories, this fantasy is very much its own tale of ruptured Indigenous culture, of environmental reciprocity and care.” —Toronto Star

“The Barren Grounds has a strong message about living with the earth and not taking more than you need.” —Toronto Public Library