Prisoner #1056: How I Survived War and Found Peace (Hardcover) 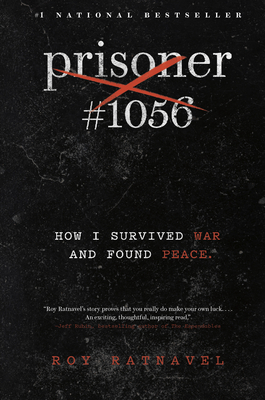 Prisoner #1056: How I Survived War and Found Peace (Hardcover)


Not Yet Published—Pre-Order Now
An incredible rags-to-riches immigrant story from a prominent Tamil Canadian who fled torture and imprisonment, arriving in Canada with $50 in his pocket, then rising from the mailroom to the executive suite.

For CI Financial executive Roy Ratnavel, “started in the mailroom” is more than a cliché. That was his start on Bay Street only a few years after escaping the ethnic violence that was engulfing Sri Lanka.

Ratnavel’s incredible journey begins when he was 17, taken by government soldiers to a prison camp for no reason other than guilty of being Tamil. He was tortured for two months, until he was able to get word out to a family friend—a colonel in the Sri Lankan army. “Uncle” Fernando was able to rescue Ratnavel from the camp and return the bruised, bloodied boy to his family.

Ratnavel’s father understood that there was no future for his son in Sri Lanka. He sought refuge for his son in Canada. When the consular immigration officer asked for proof that the boy faced danger in his homeland, Roy simply lifted his shirt to show the man his raw scars. It wasn’t long before Ratnavel was on a plane. His father was shot two days later.

To repay the debt he owed to his hero of a father, Ratnavel was determined to find the bright future that had been envisioned for him. He went to night school, worked three jobs at a time, and lived in tiny apartments with four roommates. He persevered, and he hustled.  He accepted no charity, even from relatives, but he made the most of the opportunities set in his path and the mentorship offered by those Canadians who recognized his work ethic.

Prisoner #1056 is not only a hugely moving immigrant success story and a searing account of overcoming unimaginable injustice and trauma—it is a passionate narrative of determination, and of finding a way to thrive in the darkest of circumstances.
Roy Ratnavel was born in 1969 in the capital city of Colombo, Sri Lanka. At the age of seventeen, he became a political prisoner, and spent grueling months in brutal and oppressive conditions. After his miraculous release from prison, he arrived in Canada all alone at the age of eighteen, with just $50 in his pocket. Ratnavel is now an executive at Canada’s largest independent asset management company. Prisoner #1056 is his first book. He currently resides in Toronto.