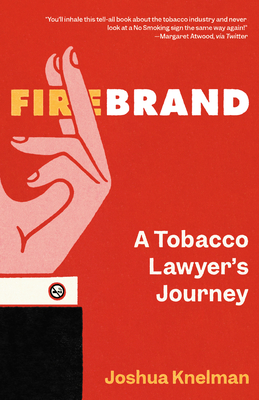 
Not On Our Shelves—Ships in 1-5 Days
"You’ll inhale this tell-all book about the tobacco industry and never look at a No Smoking sign the same way again!"
—Margaret Atwood, via Twitter

“Given everything the lawyer knew up to that point about smoking, as far as he could tell, cigarettes shouldn’t even have been available as a mass market product...”

It’s the start of the new millennium and a young lawyer is recruited to work for an unnamed multinational company. It isn’t until his second interview that the product the company produces is revealed to him: cigarettes. Possibly the most controversial consumer product in human history: seductive, addictive, and deadly—yet completely legal. Over the next decade, he travels the world as he works as legal counsel to help successfully market cigarettes in dozens of countries.

Firebrand ventures into the heart of the tobacco industry and the icy paradoxes of capitalism, each chapter a counterintuitive lesson on how cigarette companies—the target of increasingly intense anti-smoking campaigns and government regulations, including the 1964 Surgeon General’s Report and 200-billion-dollar debt of the 1998 Master Settlement Agreement—continue to pivot and thrive in the 21st century, inhaling profits from their one billion smokers worldwide.

As Mad Men did for the alcohol-fueled, oversexed, corrupt world of New York advertising, Firebrand does for the even more despised world of big tobacco, in an addictive, behind-the-scenes piece of storytelling. The lawyer’s work takes him from manufacturing factories to hocking “sticks” at UK corner store counters; from tacky resorts in Spain and pirate city-states to luxury hotels and Grand Prix events across European and Asian cities. A contemporary tale of our ambiguous times, told with character-based drive and dry humour, Firebrand is a grand tour of the compelling paradoxes of globalization and corporate culture, shrink-wrapped in an engrossing narrative of a morally dubious yet completely legal enterprise.

“This is storytelling at its best. Wry observation, compelling narrative, fascinating characters, page-turning writing, and an age-old question driving it all...”
—Joel Bakan, author of The New Corporation: How ‘Good’ Corporations are Bad for Democracy
JOSHUA KNELMAN is an award-winning author, a founding member of The Walrus magazine, and the recipient of multiple National Magazine Awards. His writing has appeared in The Walrus, Toronto Life, National Post, and The Globe and Mail. His debut true crime bestseller, Hot Art, earned the Crime Writers of Canada Best Non-Fiction Book Award and the Edna Staebler Award for Creative Non-Fiction. He lives in Toronto.
“You’ll inhale this tell-all book about the tobacco industry and never look at a No Smoking sign the same way again!”
—Margaret Atwood, via Twitter

“This is storytelling at its best. Wry observation, compelling narrative, fascinating characters, page-turning writing, and an age-old question driving it all: how is it that those who profit from harm get away with it, even when everyone knows what they are up to? Illusion is the answer, says Joshua Knelman—the craft of its practitioners, and the ready acceptance of its targets. That is Firebrand's story about big tobacco. It is as thrilling for its revelations as it is sobering for its conclusions.”
—Joel Bakan, author of The New Corporation: How ‘Good’ Corporations are Bad for Democracy

“Firebrand is a beautifully written, riveting tale of one man’s journey into the world of gilded evil that has seduced billions, enticing them into the embrace of the deadliest product ever invented. Joshua Knelman is a gifted storyteller, guiding us through the moral forensics of this goliath of death and pleasure as it takes over the soul of one of those who entered its portals.”
—Martyn Burke, Peabody Award–winning film director of Under Fire: Journalists in Combat

“Yes, this is about the slick maneuvering of international cigarette companies. But it’s also about how corporations navigate legislation, and how policy is never as clear-cut as it looks—especially through the eyes of a lawyer. Firebrand is addictive.”
—Jeff Rubin, former Chief Economist at CIBC World Markets, and author of The Expendables

“One of the year’s most remarkable books, [Firebrand] brilliantly untangles what Knelman calls ‘the tobacco paradox’ — how the tobacco trade thrives as much, if not more, than it ever has — and its many ironies.”
—Toronto Star

“Ever wondered why the most dangerous consumer product ever invented—the cigarette—is still legally available for sale? Joshua Knelman takes us deep inside the global tobacco industry to reveal a story of corporate greed, international intrigue, and the complicity of public policy in the face of big money. Firebrand offers a compelling case study in our addiction to capitalism, in a book that will make your heart race and your blood boil.”
—Andrew Westoll, RBC Taylor Prize–winning author of The Chimps of Fauna Sanctuary

“The most fun book on the tobacco business since Christopher Buckley’s Thank You for Smoking, with the added virtue of being grounded in real experience.”
—Washington Examiner

“How has the tobacco industry 'managed to survive decades of intense and sustained assault by the medical and scientific establishment, and from governments around the world'? In this entertaining and occasionally enraging investigation, journalist Knelman (Hot Art) seeks to answer that question . . . Packed with colorful insider details and nuanced analysis, this is a stimulating tell-all.”
—Publishers Weekly

“Knelman lights up every deeply-reported and finely-observed chapter of Firebrand with wit and insight. A rollicking and riveting insider’s tour of an insidious global industry.”
—Rachel Giese, author of Boys: What it Means to Become a Man

“As addictive as the subject matter, Knelman’s storytelling breathes intrigue, high-drama, and humour on to every page, while guiding us through the nebulous business of a killer industry. One helluva good read.”
—Garvia Bailey, broadcaster and co-founder, Media Girlfriends

“WARNING: Firebrand is a thriller told from deep inside global capitalism’s secret chambers, where few of us ever get to tread. The story will make your palms sweat and your heart race, a staggering achievement.”
—Richard Poplak, author of Paydirt: What the Search for Gold has Cost the World

“Firebrand is a brilliant insider’s look at the shadowy jurisdictions and sly legal loopholes that have helped a global pariah like the tobacco industry not only survive but thrive. A captivating narrative told at a thriller’s pace, it’s a master class in how the international corporate world really works—a triumph in business storytelling.”
—Marci McDonald, award-winning journalist and author of The Armageddon Factor

“Informative and addictive, Firebrand is an insider's view of the high stakes billion dollar international business of big tobacco that reads like a great conversation at a bar. From the backstreets of London to a dubious bar in Kazakhstan, to a Formula 1 racetrack and the storerooms of modern Spanish pirates, Joshua Knelman takes you on an epic journey to the contradictory heart of one of humanity's most pleasurable and deadly inventions.”
—Jason Logan, multi-award-winning Creative Director and author of Make Ink: A Forager's Guide To Natural Inkmaking

“[T]he pleasure of Knelman’s fast-paced Firebrand: A Tobacco Lawyer’s Journey comes in a variety of ways. For starters, you know who the bad guys are right from the get-go (the tobacco giants). The central figure is a young Canadian lawyer who stays unnamed from beginning to end as he goes about the bad guys’ business of keeping the lethal but legal product ever available to the addicted masses. His tale, as told by Knelman, has something of the style of a John Grisham thriller.”
—Literary Review of Canada