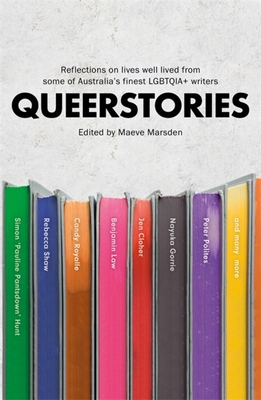 There's more to being queer than coming out and getting married. This exciting and contemporary collection contains stories that are as diverse as the LGBTQIA+ community from which they're drawn.

From hilarious anecdotes of an awkward adolescence, to heartwarming stories of family acceptance and self-discovery, the LGBTQIA+ community has been sharing stories for centuries, creating their own histories, disrupting and reinventing conventional ideas about narrative, family, love and community.

Maeve Marsden is a writer, director, producer and performer. Her writing has appeared in Daily Life, the Guardian, Junkee, ABC Online, SBS Online, ArtsHub, Daily Review and Gay News Network. Maeve produces, directs and performs in comedy, cabaret, live music and storytelling. Currently she is working on several projects, including Queerstories, the hugely popular storytelling event that features members of the LGBTQI community.

As a child of same-sex parents, Maeve is passionate about the rights of diverse families, and she writes and speaks on the issue often. In 2012, she organised and spoke at a panel for Queer Thinking entitled 'Growing up other: Children of same-sex parents speak'. Since 2013, she has been involved with the team behind feature documentary, Gayby Baby and ABC2 doco, Growing Up Gayby, as a community consultant, education advisor and social media strategist.

A warm and inviting anthology, Queerstories welcomes you in with open arms and draws you into a rich conversation with some fresh and entertaining LGBTQI+ writers.—The Au Review.com.au

In a market where queer voices are often sanitised, Queerstories is political and pivotal...Queerstories is an invitation for the world to listen to the queer community at its rawest and, above all, it's a safe space for queer readers to come home to.—Books+Publishing