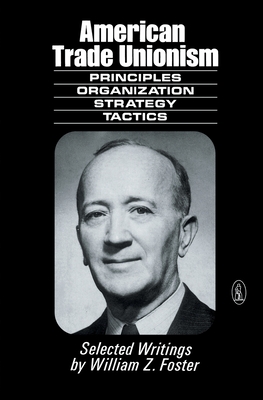 This book remains the most competent treatment of the principles and organization, strategy, and tactics, of the trade union movement. Drawing upon his life-long experience as an outstanding labor leader, the author shows the role of a militant Left in the trade unions, without which significant progress has proved impossible. Foster selected and edited his writings for this volume and supplied an introduction and epilogue. It is now reprinted as he prepared it in 1947.

The period covered in these writings runs back, roughly, half a century. While not a formal history of trade unionism during this time, the book nevertheless throws much light on the major developments in the trade union movement, It particularly highlights the long struggle of the left-wing and progressive forces for improved trade union organ-ization, policies, and leadership.

The period in question was one of stormy and significant economic and political developments. American industry has expanded prodigiously and also has become highly monopolized. World capitalism has matured and entered into its final stage of imperialism. Two world wars, fascism, and endless class struggle have been expressions of this development of capitalism. The writings in this volume show how the American working class has reacted to this vital expansion and the decline of the world capitalist system.

While there have been other compilations of writings on trade unionism, this is the first time that the policies, tactics, and role of the left wing during those past decades have been recorded in a single volume. Written in the midst of the struggle, the material assembled here is itself part of the living record of the American trade union movement.