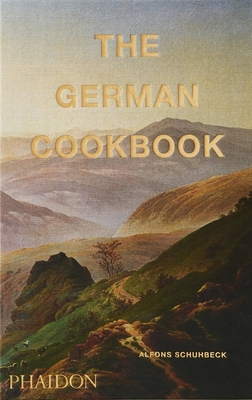 Germany is made up of a series of distinct regional culinary cultures. From Hamburg on the north coast to Munich in the Alpine south, and from Frankfurt in the west to Berlin in the east, Germany's cities and farmland yield a remarkable variety of ingredients and influences.

This authoritative book showcases this diversity, with 500 recipes including both beloved traditional cuisine and contemporary dishes representing the new direction of German cooking - from snacks to desserts, meat, poultry, and fish, to potatoes, dumplings, and noodles. An introduction showcasing the culinary cultural history of the country introduces the origins of the classic recipes.

These recipes have been tested for accuracy in a home kitchen, making them fully accessible to a wide range of cooking abilities. Icons indicate everything from vegetarian, gluten-, and dairy-free options to recipes with five ingredients or fewer and simple one-pot dishes.

The German Cookbook is the latest in Phaidon's bestselling series of authoritative cookbooks on global cuisines.

Alfons Schuhbeck hails from Bavaria, and is regarded as an authority on German cuisine. In addition to his work as a chef and broadcaster, Schuhbeck is a restaurateur and businessman, with an online food business, wine bistro, spice shop, ice-cream parlour, two restaurants, and a cooking school.

As featured in Vogue, Food52, and The Wall Street Journal

'The German Cookbook provides 450 pages of recipes, ranging from classic dishes to contemporary

Caspar David Friedrich. . . . It's hard not to feel hungry after browsing through the hundred-plus food
photographs.' – Vogue

'German food deserves much more attention than it gets. Top marks to Phaidon, then, for attempting to put that right with The German Cookbook... a collection of 500 recipes that highlight the country's distinct gastronomic regions, with dishes ranging from fish burgers and beer-braised beef to 'drunken maidens' and poppy seed dumplings.' – Olive

'This impressive overview of German cuisine - the type of encyclopedic cookbook that Phaidon does so well - is packed with the kind of comforting German recipes you might expect... But there are plenty of dishes that will challenge your assumptions about stereotypical German food, too.' – Food52

'A beautiful object... The German Cookbook delivers in providing solid, practical instructions for some classic dishes as well as others whose popularity is of more recent origin.' – Times Literary Supplement (TLS)

'...Beautifully designed, lavishly photographed, well written and pretty exhaustive too. You get a true insight into [the country's] food, with history, culture and regional recipes all mixed. My favourite culinary series.' – The Mail on Sunday