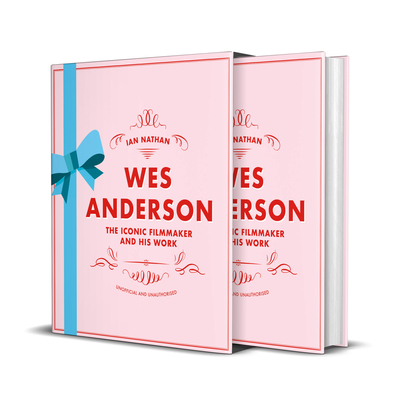 
On Our Shelves Now at:
The definitive reference for all Wes Anderson fans.

Loaded with rich imagery and detailed analysis of his incredible films – including the classics The Grand Budapest Hotel, Rushmore, The Royal Tenenbaums and Moonrise Kingdom as well as Anderson's highly anticipated new releaseThe French Dispatch – this is the first book to feature all of Wes Anderson's movies in a single volume.

Acclaimed film journalist Ian Nathan provides an intelligent and thoughtful examination of the work of one of contemporary film’s greatest visionaries, charting the themes, visuals, and narratives that have come to define Anderson’s work and contributed to his films an idiosyncratic character that's adored by his loyal fans. From Anderson’s regular cast members – including Bill Murray and Owen Wilson – to his instantly recognisable aesthetic, recurring motifs and his scriptwriting processes, this in-depth collection will reveal how Wes Anderson became one of modern cinema’s most esteemed and influential directors.

Presented in a slipcase with 8-page gatefold section, this stunning package will delight all Wes Anderson devotees and movie lovers in general.

Ian Nathan, who lives and works in London, is one of the UK’s best-known film writers. He is the author of nine previous books, including Alien Vault, the best-selling history of Ridley Scott’s masterpiece, Terminator Vault, Tarantino, Tim Burton, The Coen Brothers and Anything You Can Imagine: Peter Jackson and the Making of Middle-earth. He is the former editor and executive editor of Empire, the world’s biggest movie magazine, where he remains a contributing editor. He also regularly contributes to The Times, The Independent, The Mail on Sunday, Cahiers Du Cinema and the Discovering Film documentary series on Sky Arts.

"...a satisfying book that will deepen enjoyment of watching (or rewatching) an Anderson film for any fan."—New York Journal of Books

"experiencing the book (one doesn’t quite read it so much as swim in it) is like strolling through the distinctly-colored halls of Anderson’s imagination...an essential addition to the library of anyone who loves film."—High Brow Magazine