Advocate: On History's Front Lines from Watergate to the Keating Five, Clinton Impeachment, and Benghazi (Hardcover) 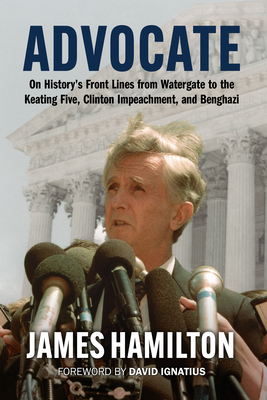 Advocate: On History's Front Lines from Watergate to the Keating Five, Clinton Impeachment, and Benghazi (Hardcover)

For more than half a century, James Hamilton has been an active participant and an inside observer of some of the most consequential moments in modern US history. He has been involved in investigations concerning Watergate, the Kennedy assassination, "Debategate," the Keating Five, the Clinton impeachment, Vince Foster's suicide, the Valerie Plame affair, Benghazi, and the Major League Baseball steroids scandal. He argued against Brett Kavanaugh in front of the Supreme Court and won. He has tales to tell of power brokers, players, and politicians who helped steer the course of the country.

Much more than a memoir from a seasoned lawyer, Advocate is a richly detailed history of some of the most sensational and controversial events in Washington politics over the past fifty years. By sharing information and insights known only to him, Hamilton fills in the gaps of historical events while advising the public on lessons that can be learned from the past. Anyone interested in the uniquely American intermingling of law and politics will find this an engaging read.