On Account of Sex: Ruth Bader Ginsburg and the Making of Gender Equality Law (Paperback) 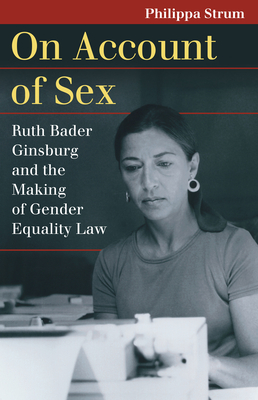 On Account of Sex: Ruth Bader Ginsburg and the Making of Gender Equality Law (Paperback)

Before she became the "Notorious R.B.G." famous for her passionate dissents while serving as an associate justice of the United States Supreme Court, Ruth Bader Ginsburg made her most significant contributions as a lawyer who litigated cases on gender equality before the high court in the 1970s. Beginning with Reed v. Reed (1971)--for which Ginsburg wrote her first full Supreme Court brief, and which was the first time the Court held a sex-based classification to be unconstitutional--Ginsburg became known for her work on the issue of gender equality. For Ginsburg, this was not merely a matter of women's rights, because inequality harms men as well. Several of the cases she argued concerned gender equality for men, beginning with Moritz v. Commissioner of Internal Review (1972). Ginsburg established the Women's Rights Project at the ACLU in 1972 and coedited the first law school casebook on sex discrimination as a professor at Columbia Law School. During the rest of the decade, until President Carter appointed her for the US Court of Appeals in 1980, she litigated cases that further developed gender equality jurisprudence on the basis of the Equal Protection Clause and Title VII of the Civil Rights Act of 1964.

Drawing on interviews with RBG herself and those who knew her, as well as extensive knowledge of the cases themselves, Philippa Strum has provided a legal history of Ginsburg's landmark litigation on behalf of women's rights and gender equality. Those cases changed the meaning of the Fourteenth Amendment and, along with two Supreme Court cases of the 1980s and 1990s (Mississippi v. Hogan and U.S. v. Virginia), remain the foundation of constitutional gender jurisprudence today. On Account of Sex shows why RBG became the rock star of the legal world and gives readers an accessible guide to these widely forgotten but momentous decisions.