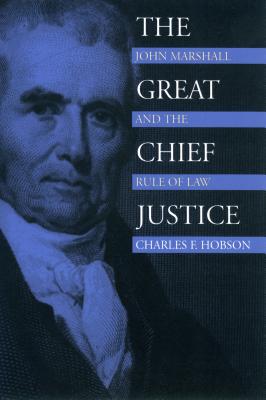 
Special Order—Subject to Availability
John Marshall remains one of the towering figures in the landscape of American law. From the Revolution to the age of Jackson, he played a critical role in defining the "province of the judiciary" and the constitutional limits of legislative action. In this masterly study, Charles Hobson clarifies the coherence and thrust of Marshall's jurisprudence while keeping in sight the man as well as the jurist. Hobson argues that contrary to his critics, Marshall was no ideologue intent upon appropriating the lawmaking powers of Congress. Rather, he was deeply committed to a principled jurisprudence that was based on a steadfast devotion to a "science of law" richly steeped in the common law tradition. As Hobson shows, such jurisprudence governed every aspect of Marshall's legal philosophy and court opinions, including his understanding of judicial review. The chief justice, Hobson contends, did not invent judicial review (as many have claimed) but consolidated its practice by adapting common law methods to the needs of a new nation. In practice, his use of judicial review was restrained, employed almost exclusively against acts of the state legislatures. Ultimately, he wielded judicial review to prevent the states from undermining the power of a national government still struggling to establish sovereignty at home and respect abroad. No chief justice and only one associate justice (William Douglas) served longer on the Supreme Court. But, as Hobson clearly shows, Marshall's deserved place in the pantheon of great American jurists rests far more upon principles than longevity. This book better than any other tells us why that's true and worthy of our attention.