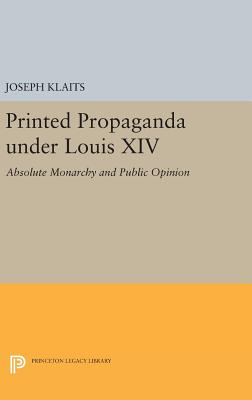 In the late seventeenth century the role of printed propaganda in manipulating public consciousness became increasingly explicit, and governments developed systematic controls over the printed word. This book considers the purposes, mechanisms, content, and audience of royal printed propaganda in early modern France.

The author first sketches the impact of the invention of printing and characterizes propaganda generally during the reign of Louis XIV. In succeeding chapters he discusses the theory and practice of censorship and the government's relationships with the recently established French periodical press, presenting a balanced portrait of the crown's objectives and mixed success in influencing the sources of opinion. The varieties of government-inspired pamphlet propaganda are carefully and extensively analyzed, and signed royal propaganda receives special attention. Originally published in 1977. The Princeton Legacy Library uses the latest print-on-demand technology to again make available previously out-of-print books from the distinguished backlist of Princeton University Press. These editions preserve the original texts of these important books while presenting them in durable paperback and hardcover editions. The goal of the Princeton Legacy Library is to vastly increase access to the rich scholarly heritage found in the thousands of books published by Princeton University Press since its founding in 1905.