Michelangelo, God's Architect: The Story of His Final Years and Greatest Masterpiece (Paperback) 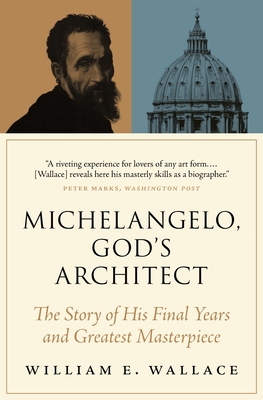 Michelangelo, God's Architect: The Story of His Final Years and Greatest Masterpiece (Paperback)

The untold story of Michelangelo's final decades--and his transformation into the master architect of St. Peter's Basilica

As he entered his seventies, Michelangelo despaired that his productive years were over. Anguished by the death of friends and discouraged by the loss of commissions to younger artists, this supreme Renaissance painter and sculptor began carving his own tomb. It was at this unlikely moment that Michelangelo was given charge of the most ambitious and daunting project of his long creative life--the design and construction of St. Peter's Basilica. In this richly illustrated book, William Wallace tells for the first time the full story of Michelangelo's final two decades--and of how the artist transformed himself into one of the greatest architects of the Renaissance.
William E. Wallace is the Barbara Murphy Bryant Distinguished Professor of Art History at Washington University in St. Louis. His many books include Michelangelo: The Artist, the Man, and His Times.