How to Stop a Conspiracy: An Ancient Guide to Saving a Republic (Hardcover) 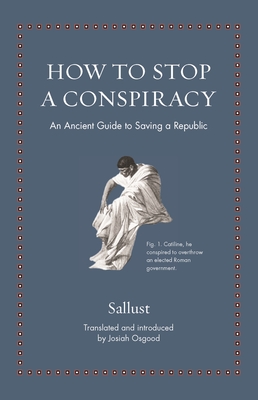 How to Stop a Conspiracy: An Ancient Guide to Saving a Republic (Hardcover)

In 63 BC, frustrated by his failure to be elected leader of the Roman Republic, the aristocrat Catiline tried to topple its elected government. Backed by corrupt elites and poor, alienated Romans, he fled Rome while his associates plotted to burn the city and murder its leading politicians. The attempted coup culminated with the unmasking of the conspirators in the Senate, a stormy debate that led to their execution, and the defeat of Catiline and his legions in battle. In How to Stop a Conspiracy, Josiah Osgood presents a brisk, modern new translation of the definitive account of these events, Sallust's The War with Catiline--a brief, powerful book that has influenced how generations of readers, including America's founders, have thought about coups and political conspiracies. In a taut, jaw-dropping narrative, Sallust pleasurably combines juicy details about Catiline and his louche associates with highly quotable moral judgments and a wrenching description of the widespread social misery they exploited. Along the way, we get unforgettable portraits of the bitter and haunted Catiline, who was sympathetic to the plight of Romans yet willing to destroy Rome; his archenemy Cicero, who thwarts the conspiracy; and Julius Caesar, who defends the conspirators and is accused of being one of them. Complete with an introduction that discusses how The War with Catiline has shaped and continues to shape our understanding of how republics live and die, and featuring the original Latin on facing pages, this volume makes Sallust's gripping history more accessible than ever before.
Josiah Osgood is professor and chair of classics at Georgetown University and the author of many books on Roman history, including How to Be a Bad Emperor: An Ancient Guide to Truly Terrible Leaders (Princeton). He lives in Washington, DC.