Not Born Yesterday: The Science of Who We Trust and What We Believe (Paperback) 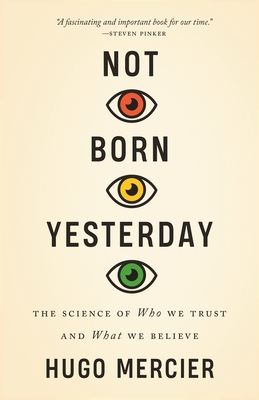 Not Born Yesterday: The Science of Who We Trust and What We Believe (Paperback)

Why people are not as gullible as we think

Not Born Yesterday explains how we decide who we can trust and what we should believe--and argues that we're pretty good at making these decisions. In this lively and provocative book, Hugo Mercier demonstrates how virtually all attempts at mass persuasion--whether by religious leaders, politicians, or advertisers--fail miserably. Drawing on recent findings from political science and other fields ranging from history to anthropology, Mercier shows that the narrative of widespread gullibility, in which a credulous public is easily misled by demagogues and charlatans, is simply wrong. Why is mass persuasion so difficult? Mercier uses the latest findings from experimental psychology to show how each of us is endowed with sophisticated cognitive mechanisms of open vigilance. Computing a variety of cues, these mechanisms enable us to be on guard against harmful beliefs, while being open enough to change our minds when presented with the right evidence. Even failures--when we accept false confessions, spread wild rumors, or fall for quack medicine--are better explained as bugs in otherwise well-functioning cognitive mechanisms than as symptoms of general gullibility. Not Born Yesterday shows how we filter the flow of information that surrounds us, argues that we do it well, and explains how we can do it better still.
Hugo Mercier is a cognitive scientist at the Jean Nicod Institute in Paris and the coauthor of The Enigma of Reason. He lives in Nantes, France. Twitter @hugoreasoning