Just Giving: Why Philanthropy Is Failing Democracy and How It Can Do Better (Paperback) 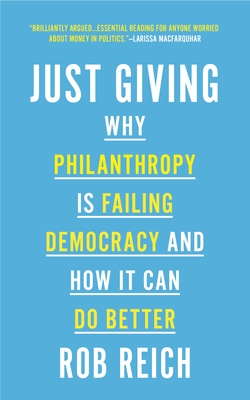 Just Giving: Why Philanthropy Is Failing Democracy and How It Can Do Better (Paperback)

The troubling ethics and politics of philanthropy

Is philanthropy, by its very nature, a threat to today's democracy? Though we may laud wealthy individuals who give away their money for society's benefit, Just Giving shows how such generosity not only isn't the unassailable good we think it to be but might also undermine democratic values. Big philanthropy is often an exercise of power, the conversion of private assets into public influence. And it is a form of power that is largely unaccountable and lavishly tax-advantaged. Philanthropy currently fails democracy, but Rob Reich argues that it can be redeemed. Just Giving investigates the ethical and political dimensions of philanthropy and considers how giving might better support democratic values and promote justice.
Rob Reich is professor of political science and codirector of the Stanford Center on Philanthropy and Civil Society at Stanford University.