Ethics in the Real World: 82 Brief Essays on Things That Matter (Paperback) 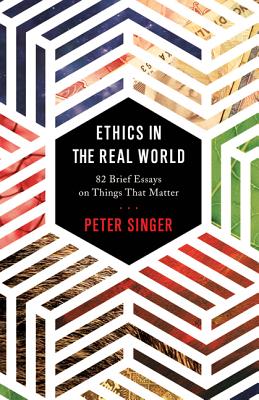 Ethics in the Real World: 82 Brief Essays on Things That Matter (Paperback)

Peter Singer is often described as the world's most influential philosopher. He is also one of its most controversial. The author of important books such as Animal Liberation, Practical Ethics, Rethinking Life and Death, and The Life You Can Save, he helped launch the animal rights and effective altruism movements and contributed to the development of bioethics. Now, in Ethics in the Real World, Singer shows that he is also a master at dissecting important current events in a few hundred words. In this book of brief essays, he applies his controversial ways of thinking to issues like climate change, extreme poverty, animals, abortion, euthanasia, human genetic selection, sports doping, the sale of kidneys, the ethics of high-priced art, and ways of increasing happiness. Singer asks whether chimpanzees are people, smoking should be outlawed, or consensual sex between adult siblings should be decriminalized, and he reiterates his case against the idea that all human life is sacred, applying his arguments to some recent cases in the news. In addition, he explores, in an easily accessible form, some of the deepest philosophical questions, such as whether anything really matters and what is the value of the pale blue dot that is our planet. The collection also includes some more personal reflections, like Singer's thoughts on one of his favorite activities, surfing, and an unusual suggestion for starting a family conversation over a holiday feast. Now with a new afterword by the author, this provocative and original book will challenge--and possibly change--your beliefs about many real-world ethical questions.
Peter Singer is the Ira W. DeCamp Professor of Bioethics in the University Center for Human Values at Princeton University and Laureate Professor at the University of Melbourne. He first became well known internationally in 1975 with the publication of Animal Liberation. His other books include How Are We to Live?, The Ethics of What We Eat (with Jim Mason), and The Most Good You Can Do. He divides his time between Princeton and Melbourne.