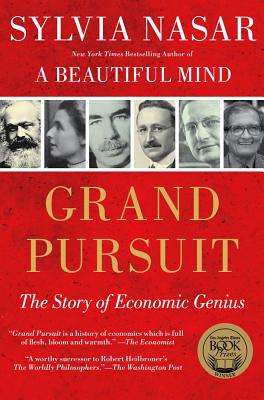 
Not On Our Shelves—Ships in 1-5 Days
An instant New York Times bestseller, in a sweeping narrative the author of the esteemed A Beautiful Mind takes us on a journey through modern history with the men and women who changed the lives of every single person on the planet. Grand Pursuit is the epic story of the making of modern economics, of how economics rescued mankind from squalor and deprivation by placing its material fate in its own hands.

A New York Times bestseller, this sweeping narrative from the author of A Beautiful Mind takes us on a journey through modern history with the men and women who changed the lives of every single person on the planet. Grand Pursuit is the epic story of the making of modern economics, of how economics rescued mankind from squalor and deprivation by placing its material fate in its own hands.

Sylvia Nasar is the author of the bestselling A Beautiful Mind, which won the National Book Critics Circle Award for biography. She is the John S. and James. L Knight Professor at the Columbia Graduate School of Journalism.

“Nasar brilliantly brings to life game-changing economists from Marx to Hayek and from Sidney Webb to Milton Friedman, tracing the evolution of modern economic thinking through the richly detailed stories of the men and woman who reshaped how we think of life’s possibilities. . . . This is an utterly fascinating book on many levels. . . . A Beautiful Mind, Nasar’s previous book, was about an economist named John Nash, but Nasar’s mind is pretty good, too. No lesser mind could have written a book so rich, so compelling, so important, and so much fun.”

“A fascinating excursion into the economic ideas and personalities that have deposited most of us at a standard of living unparalleled in human history…engrossing…Nasar, who wrote A Beautiful Mind, …is drawn to intellectual giants. They stomp across the idiosyncratic and readable pages of Grand Pursuit, which unfurls with a David McCullough-like knack for telling popular history….On these pages, the dismal science shines.”--Karen R. Long, Cleveland Plain Dealer


“Grand Pursuit is a worthy successor to Robert Heilbroner’s The Worldly Philosophers. . . . Nasar’s aim is to put the reader into the lives of the characters of a sweeping historical drama that extends from Victorian England to modern-day India. That she largely succeeds reflects the depth and breadth of her research but also the elegance of her prose.”

“Nasar is a superb writer. . . . The book is a kind of portrait gallery of economic thinkers, each artfully set down in his or her time and place. . . . You can’t help becoming engrossed in their lives.”


“[This] is the story of the evolution of a radical, planet-reshaping idea…The canvas is epic…The details are fresh, at times startling…At the same time, gnarly but critical concepts…shine through in all their richness and complexity. If only Econ 101 had been this interesting!” –Fortune


“Grand Pursuit is a history of economics which is full of flesh, bloom and warmth. The author demonstrates that there is far more to economics than Thomas Carlyle’s “dismal science”. And she does so with all the style and panache that you would expect from the author of the 1998 bestseller, A Beautiful Mind. . . . A wonderful book. Grand Pursuit deserves a place not only in every economist’s study but also on every serious reader’s bedside table.”

“One of the many wonderful things about Nasar’s book is that in it, economic genius isn’t limited to the usual suspects….Even when exploring famous economic minds, Nasar brings out the humanity in the dismal science by showing their ideas are nearly always rooted in formative experiences.”

“Nasar has written a compelling history of modern economics, a story of the theorists as well as of their theories. . . . Grand Pursuit is artfully rendered and a delight to read. . . . One suspects that future economics textbooks will warrant some revisions. All the same, their authors would profit from consulting Grand Pursuit.”

“A timely reminder of the importance of the so-called dismal science. . . . Written almost as a novel and aimed at those without a background in economics, the book charts capitalism's evolution through the eyes of the people who invented it. . . . It is compellingly written, full of detail and vivid anecdotes, and with a refreshing focus on people rather than prices.”