A Calendar of Wisdom: Daily Thoughts to Nourish the Soul, Written and Selected from the World's Sacred Texts (Hardcover) 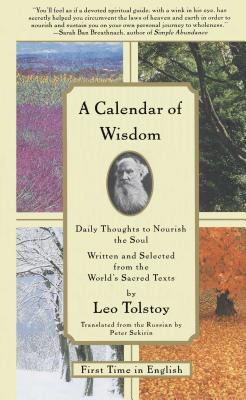 A Calendar of Wisdom: Daily Thoughts to Nourish the Soul, Written and Selected from the World's Sacred Texts (Hardcover)


Not On Our Shelves—Ships in 1-5 Days
This collection of daily thoughts to nourish the soul from the world’s sacred texts by Leo Tolstoy feature gems of inspiration and wisdom—author Thomas Keneally calls this book “transcendent, and that we are grateful he lived long enough to endow us with his grand inheritance.”

This is the first-ever English-language edition of the book Leo Tolstoy considered to be his most important contribution to humanity, the work of his life's last years.

Widely read in pre-revolutionary Russia, banned and forgotten under Communism; and recently rediscovered to great excitement, A Calendar of Wisdom is a day-by-day guide that illuminates the path of a life worth living with a brightness undimmed by time.

Unjustly censored for nearly a century, it deserves to be placed with the few books in our history that will never cease teaching us the essence of what is important in this world.
Leo Tolstoy grew up in Russia, raised by a elderly aunt and educated by French tutors while studying at Kazen University before giving up on his education and volunteering for military duty. When writing his greatest works, War and Peace and Anna Karenina, Tolstoy drew upon his diaries for material. At eighty-two, while away from home, he suffered from declining health and died in Astapovo, Riazan in 1910.
Sarah Ban Breathnach SIMPLE ABUNDANCE All writers believe that there is one book that they and they alone were born to bring into the world. The great Russian novelist Leo Tolstoy believed his was A Calendar of Wisdom. Here is a profound and passionate collaboration between the Great Creator and one of history's consummate artists. That we should be able to reach through the portcullis of the past to share the private observations that inspired Leo Tolstoy to discover the sacred in the ordinary a century after he gleaned them from the world's sacred texts seems to me to be nothing less than miraculous. You'll feel as if a devoted spiritual guide, with a wink in his eye, has secretly helped you circumvent the laws of heaven and earth in order to nourish and sustain you on your own personal journey to wholeness. Savoring each day's passage fills me with gratitude, delight, and often awe. Here is a book to be cherished.