Challenge For The Actor (Hardcover) 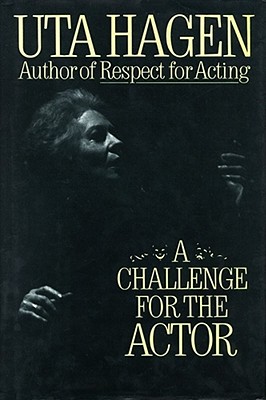 Challenge For The Actor (Hardcover)


Backordered
Theoretically, the actor ought to be more sound in mind and body than other people, since he learns to understand the psychological problems of human beings when putting his own passions, his loves, fears, and rages to work in the service of the characters he plays. He will learn to face himself, to hide nothing from himself -- and to do so takes an insatiable curiosity about the human condition.
from the Prologue
Uta Hagen, one of the world's most renowned stage actresses, has also taught acting for more than forty years at the HB Studio in New York. Her first book, Respect for Acting, published in 1973, is still in print and has sold more than 150,000 copies. In her new book, A Challenge for the Actor, she greatly expands her thinking about acting in a work that brings the full flowering of her artistry, both as an actor and as a teacher. She raises the issue of the actor's goals and examines the specifics of the actor's techniques. She goes on to consider the actor's relationship to the physical and psychological senses. There is a brilliantly conceived section on the animation of the body and mind, of listening and talking, and the concept of expectation.
But perhaps the most useful sections in this book are the exercises that Uta Hagen has created and elaborated to help the actor learn his craft. The exercises deal with developing the actor's physical destination in a role; making changes in the self serviceable in the creation of a character; recreating physical sensations; bringing the outdoors on stage; finding occupation while waiting; talking to oneself and the audience; and employing historical imagination.
The scope and range of Uta Hagen here is extraordinary. Her years of acting and teaching have made her as finely seasoned an artist as the theatre has produced.
Uta Hagen was born in Germany, then she moved to the United States, where her father was head of the Art History Department at the University of Wisconsin in Madison. Her first role was as Ophelia in Eva Le Gallienne's production of Hamlet. She then played the role of Nina in the Lunts' production of The Sea Gull. She has also appeared in Key Largo, A Streetcar Named Desire, The Country Girl, Saint Joan, and Who's Afraid of Virginia Woolf? She has recently appeared on "American Playhouse" for PBS, and among her recent films is Reversal of Fortune. She was married for more than forty years to Herbert Berghof, the internationally known director, actor, and teacher. Uta Hagen lives in New York City.
Publishers Weekly This fascinating and detailed book about acting is Miss Hagen's credo, the accumulated wisdom of her years spent in intimate communion with her art. It is at once the voicing of her exacting standards for herself and those she teaches, and an explanation of the means to the end. For those unable to avail themselves of her personal tutelage, her book is the best substitute.

Brooks Atkinson Uta Hagen's Respect for Acting is not only pitched on a high artistic level but also full of homely, practical information by a superb craftswoman. An illuminating discussion of the standards and techniques of enlightened stage acting.

Library Journal Hagen adds to the large corpus of titles on acting with vivid dicta drawn from experience, skill, and a sense of personal and professional worth, Her principal asset in this treatment is her truly significant imagination. Her "object exercises" display a wealth of detail with which to stimulate the student preparing a scene for presentation.

Harold Clurman Respect for Acting is a simple, lucid, and sympathetic statement of actors problems in the theatre and basic tenets for their training wrought from the personal experience of a fine actress and teacher of acting.

Fritz Weaver Uta Hagen is our greatest living actor; she is, moreover, interested and mystified by the presence of talent and its workings; her third gift is a passion to communicate the mysteries of the craft to which she has given her life. There are almost no American actors uninfluenced by her.