The Catcher Was a Spy: The Mysterious Life of Moe Berg (Paperback) 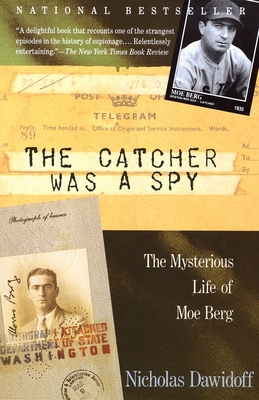 The Catcher Was a Spy: The Mysterious Life of Moe Berg (Paperback)

“A delightful book that recounts one of the strangest episodes in the history of espionage. . . . . Relentlessly entertaining.”—The New York Times Book Review

Moe Berg is the only major-league baseball player whose baseball card is on display at the headquarters of the CIA. For Berg was much more than a third-string catcher who played on several major league teams between 1923 and 1939. Educated at Princeton and the Sorbonne, he as reputed to speak a dozen languages (although it was also said he couldn't hit in any of them) and went on to become an OSS spy in Europe during World War II.

As Nicholas Dawidoff follows Berg from his claustrophobic childhood through his glamorous (though equivocal) careers in sports and espionage and into the long, nomadic years during which he lived on the hospitality of such scattered acquaintances as Joe DiMaggio and Albert Einstein, he succeeds not only in establishing where Berg went, but who he was beneath his layers of carefully constructed cover. As engrossing as a novel by John le Carré, The Catcher Was a Spy is a triumphant work of historical and psychological detection.
Nicholas Dawidoff is the author of five books. One of them, The Fly Swatter, was a Pulitzer Prize finalist, and another, In the Country of Country, was named one of the greatest all-time works of travel literature by Conde Nast Traveller. His first book, The Catcher Was A Spy: The Mysterious Life Of Moe Berg was a national bestseller and appeared on many 1994 best book lists. In 2009, Pantheon published The Crowd Sounds Happy: A Story of Love, Madness and Baseball. He is also the editor of the Library of America’s Baseball: A Literary Anthology. A graduate of Harvard University, he has been a Guggenheim, Civitella Ranieri and Berlin Prize Fellow, and is a contributor to The New Yorker, The New York Times Magazine and the American Scholar.
“A delightful book that recounts one of the strangest episodes in the history of espionage. . . . . Relentlessly entertaining.”—The New York Times Book Review

“[A] meticulously researched biography. . . . . As Dawidoff tracks his elusive subject…the story becomes more than a search for the core of someone who spent his life making himself a mystery, but a dark, moving human tragedy.”—Los Angeles Times

“[Dawidoff] has done heroic research, much of it in unlit corners. . . . Moe Berg doubtless will forever remain a mystery, but Dawidoff has brought the mystery to life.”—Washington Post