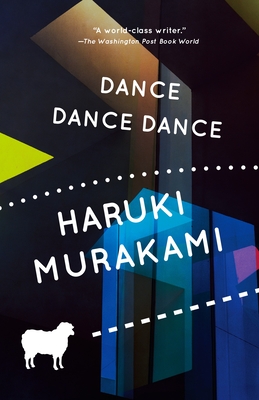 
In Stock—Click for Locations
Dance Dance Dance—a follow-up to A Wild Sheep Chase—is a tense, poignant, and often hilarious ride through Murakami’s Japan, a place where everything that is not up for sale is up for grabs.

As Murakami’s nameless protagonist searches for a mysteriously vanished girlfriend, he is plunged into a wind tunnel of sexual violence and metaphysical dread. In this propulsive novel, featuring a shabby but oracular Sheep Man, one of the most idiosyncratically brilliant writers at work today fuses together science fiction, the hardboiled thriller, and white-hot satire.
Haruki Murakami is a best-selling Japanese writer. His works of fiction and non-fiction have garnered critical acclaim and numerous awards, including the Franz Kafka Prize, the Frank O'Connor International Short Story Award and the Jerusalem Prize, among others. Murakami's fiction is humorous and surreal, focusing on themes of alienation and loneliness. He is considered an important figure in postmodern literature. The Guardian praised Murakami as "among the world's greatest living novelists" for his works and achievements. Murakami is the author of 1Q84, The Wind-Up Bird Chronicles, Men Without Women and many more.

Alfred Birnbaum is an American translator who has translated works by Haruki Murakami, Miyabe Miyuki, and Natsuki Ikezawa. He has also edited the short story anthology Monkey Brain Sushi: New Tastes in Japanese Fiction. Birnbaum is a professor of creative writing and translation at Waseda University’s School of International Liberal Studies.
“A world-class writer who takes big risks. . . . If Murakami is the voice of a generation then it is the generation of Thomas Pynchon and Don DeLillo.” –The Washington Post Book World

“A Japanese Phillip K. Dick with a sense of humor . . . [Murakami belongs] in the topmost ranks of writers of international stature.” –Newsday

“There are novelists who dare to imagine the future, but none is as scrupulously, amusingly up-to-the-minute as . . . Murakami.” –Newsday

“All the hallmarks of Murakami’s greatness are here: restless and sensitive characters. Disturbing shifts into altered reality, silky smooth turns of phrase and a narrative with all the momentum of a roller-coaster. . . . This is the sort of page-turner [Mishima} might have written.” –Publishers Weekly