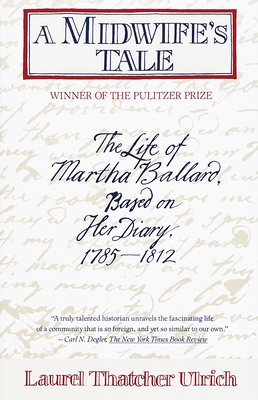 
Backordered
PULITZER PRIZE WINNER • Drawing on the diaries of one woman in eighteenth-century Maine, "A truly talented historian unravels the fascinating life of a community that is so foreign, and yet so similar to our own" (The New York Times Book Review).

Between 1785 and 1812 a midwife and healer named Martha Ballard kept a diary that recorded her arduous work (in 27 years she attended 816 births) as well as her domestic life in Hallowell, Maine. On the basis of that diary, Laurel Thatcher Ulrich gives us an intimate and densely imagined portrait, not only of the industrious and reticent Martha Ballard but of her society. At once lively and impeccably scholarly, A Midwife's Tale is a triumph of history on a human scale.
LAUREL THATCHER ULRICH was born in Sugar City, Idaho. She holds degrees from the University of New Hampshire, University of Utah, and Simmons College. She is 300th Anniversary University Professor at Harvard University and past president of the American Historical Association. As a MacArthur Fellow, Ulrich worked on the PBS documentary based on her Pulitzer Prize-winning book A Midwife's Tale. Her work is also featured on an award-winning website called dohistory.org. She is immediate past president of the Mormon History Association. She lives in Cambridge, Massachusetts.
"A truly talented historian unravels the fascinating life of a community that is so foreign, and yet so similar to our own." —The New York Times Book Review

"A marvelously nuanced, subtle, and unillusioned portrayal of one woman's life in early America. It has the makings of a classic." —Stephen Innes, University of Virginia

"It takes a historian of extraordinary persistence, skill, and empathy to recognized [Martha Ballard's] diary as something of a buried treasure and to painstakingly unearth its gems.... Ulrich has recognized Ballard's great spirit, and has given to us the gift of a life worth knowing." —Philadelphia Inquirer