The Beak of the Finch: A Story of Evolution in Our Time (Paperback) 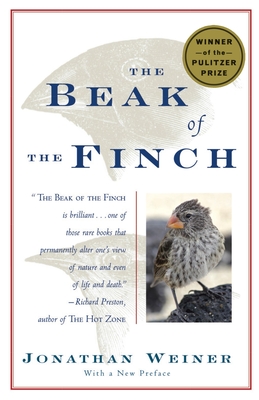 The Beak of the Finch: A Story of Evolution in Our Time (Paperback)


On Our Shelves Now at:
PULITZER PRIZE WINNER • A dramatic story of groundbreaking scientific research of Darwin's discovery of evolution that "spark[s] not just the intellect, but the imagination" (Washington Post Book World).

“Admirable and much-needed.... Weiner’s triumph is to reveal how evolution and science work, and to let them speak clearly for themselves.”—The New York Times Book Review

On a desert island in the heart of the Galapagos archipelago, where Darwin received his first inklings of the theory of evolution, two scientists, Peter and Rosemary Grant, have spent twenty years proving that Darwin did not know the strength of his own theory. For among the finches of Daphne Major, natural selection is neither rare nor slow: it is taking place by the hour, and we can watch.

In this remarkable story, Jonathan Weiner follows these scientists as they watch Darwin's finches and come up with a new understanding of life itself. The Beak of the Finch is an elegantly written and compelling masterpiece of theory and explication in the tradition of Stephen Jay Gould.
JONATHAN WEINER is one of the most distinguished popular-science writers in the country: his books have won the Pulitzer Prize, the National Book Critics Circle Award, and the Los Angeles Times Book Prize. His writing has appeared in The New Yorker, Slate, Time, The New York Times Magazine, The Washington Post, The New Republic, Scientific American, Smithsonian, and many other newspapers and magazines, and he is a former editor at The Sciences. He is the author of The Beak of the Finch; Time, Love, Memory; Long for This World; His Brother's Keeper; The Next One Hundred Years; and Planet Earth. He lives in New York, where he teaches science writing at Columbia University's Graduate School of Journalism.
Winner of the Los Angeles Times Book Prize

“The Beak of the Finch is brilliant ... one of those rare books that permanently alters one’s view of nature and even of life and death.”
—Richard Preston, author of The Hot Zone

“Evolution in the flesh, a landmark in evolutionary studies.”
—Los Angeles Times

“Evocative writing, exhaustive research, and Weiner’s memorable portrait of the engaging Grants assure The Beak of the Finch membership in the select pantheon of science books that spark not just the intellect, but the imagination.”
—Washington Post Book World

“Admirable and much-needed ... superb at explaining very complex scientific and philosophical concepts in lucid prose.... Weiner’s triumph is to reveal how evolution and science work, and to let them speak clearly for themselves.”
—The New York Times Book Review

“A sparkling exploration of the single most powerful and compelling force in nature.”
—Philadelphia Inquirer

“This is science writing at its most accomplished: both an account of how science is done and an eloquent illustration of why we do it.”
—Globe and Mail (Toronto)

“Wise and intelligent ... Weiner’s engrossing book shows just how profoundly Darwin underestimated the power of his own ideas.”
—The Sciences

“It has every chance of becoming a classic.”
—The Times (of London)

“This is an exceptional book, artfully crafted, lucid and richly descriptive. It is the best exploration of evolution written in recent years. It conveys a powerful insight into life that helps us to understand the fundamental forces of nature and our relationship to the world about us. Highly recommended.”
—Cleveland Plain Dealer

“First class ... one of the best pieces of science writing that I have read in a long while.”
—Nature

“Spectacular, page-turning ... the ideal book to recommend to any doubter who asks, ‘where’s the evidence for evolution.’”
—Sunday Times (London)

“Jonathan Weiner is a science writer who makes complex research accessible to the ordinary person, and he does so with wit and style.... Reads like a combination detective story and adventure book.”
—Dallas Morning News

“Leads us deeper and deeper into what Darwin called ‘the mystery of mysteries’.... Weiner picks up the pieces of this puzzle and holds them up to the light at just the right angle.... He leaves us with not only a greater understanding of the forces of nature but also a greater sense of wonder at creation.”
—Chicago Tribune

“Lyrical ... as intimate, precise and meticulous as his subject’s groundbreaking work, and deserves to have the same wide influence.”
—The Economist

“This remarkable book will forever change your sense of the pace of nature—once you’ve read Weiner s elegant and absorbing account, the world will seem infinitely more fluid, shifting, alive.”
—Bill McKibben, author of The End of Nature

“Well-written, fascinating ... this classic of science writing deserves to be as widely read as any Tom Clancy thriller.”
—Roanoke Times & World-News

“Combines vivid and witty on-the-scene reporting with a sound and evocative explication of Charles Darwin’s place in the history of ideas. Succinct and highly readable, The Beak of the Finch is science writing of a high order.”
—Timothy Ferris, author of Coming of Age in the Milky Way

“Darwin’s finches make for a scientific thriller ... in The Beak of the Finch, Jonathan Weiner took me on an astonishing voyage of discovery that, in many ways, is a sequel to the most famous scientific voyage in history.”
—Rochester Democrat and Chronicle

“[An] engaging narrative of a modern scientific study that will forever change the way that we view evolution. . . . This is a rare book: The Beak of the Finch is at once absorbing science history, deftly crafted popular science treatise and engagingly personal narrative.... It has an important story to tell, not only of Darwin’s finches and evolution but also of the way that forefront scientific research is carried out.”
—The Los Angeles Times Book Review

“This book is an extraordinary achievement. It is carefully researched, impeccably crafted, unflinchingly dramatic, yet conscientiously scientific.”
—School Library Journal