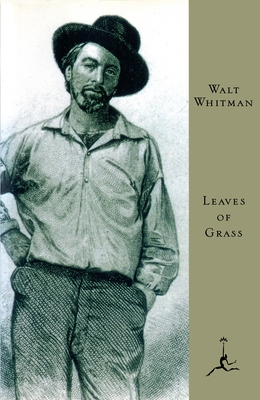 
Not On Our Shelves—Ships in 1-5 Days
Abraham Lincoln read it with approval, but Emily Dickinson described its bold language and themes as "disgraceful." Ralph Waldo Emerson found it "the most extraordinary piece of wit and wisdom that America has yet produced." Published at the author's expense on July 4, 1855, Leaves of Grass inaugurated a new voice and style into American letters and gave expression to an optimistic, bombastic vision that took the nation as its subject. Unlike many other editions of Leaves of Grass, which reproduce various short, early versions, this Modern Library Paperback Classics "Death-bed" edition presents everything Whitman wrote in its final form, and includes newly commissioned notes.
Before the age of thirty-six there was no sign that Walt Whitman would become even a minor literary figure, let alone the major poetic voice of an emerging America. Born in 1819 on Long Island, he was the second son of a carpenter and contractor. His formal schooling ended at age eleven, when he was apprenticed to a printer in Brooklyn. He became a journeyman printer in 1835 and spent the next two decades as a printer, free-lance writer, and editor in New York. In 1855, at his own expense, he published the twelve long poems, without titles, that make up the first edition of Leaves of Grass. The book, with its unprecedented mixture of the mystical and the earthy, was received with puzzlement or silence, except by America's most distinguished writer, Ralph Waldo Emerson. Whitman lost no time in preparing a second edition, adding "Crossing Brooklyn Ferry" and nineteen other new poems in 1856. With the third edition (1860), the book had tripled in size. Whitman would go on adding to it and revising it for the rest of his life. Whitman's poetry slowly achieved a wide readership in America and in England. He was praised by Swinburne and Tennyson, and visited by Oscar Wilde. He suffered a stroke in 1873 and spent the remainder of his life in Camden, New Jersey. His final edition of Leaves of Grass appeared in 1892, the year of his death.
"Whitman's best poems have that permanent quality of being freshly painted, of not being dulled by the varnish of the years."
--Malcolm Cowley