The Perfect Fascist: A Story of Love, Power, and Morality in Mussolini's Italy (Paperback) 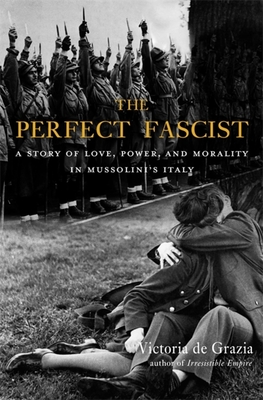 The Perfect Fascist: A Story of Love, Power, and Morality in Mussolini's Italy (Paperback)

A New Statesman Book of the Year
Winner of the Helen and Howard R. Marraro Prize
Winner of the Aldo and Jeanne Scaglione Prize for Italian Studies

"Extraordinary...I could not put it down."
--Margaret MacMillan "Reveals how ideology corrupts the truth, how untrammeled ambition destroys the soul, and how the vanity of white male supremacy distorts emotion, making even love a matter of state."
--Sonia Purnell, author of A Woman of No Importance When Attilio Teruzzi, a decorated military officer and early convert to the Fascist cause, married a rising American opera star, his good fortune seemed settled. The wedding was blessed by Mussolini himself. Yet only three years later, Teruzzi, now commander of the Black Shirts, renounced his wife. Lilliana was Jewish, and fascist Italy would soon introduce its first race laws. The Perfect Fascist pivots from the intimate story of a tempestuous courtship and inconvenient marriage to the operatic spectacle of Mussolini's rise and fall. It invites us to see in the vain, unscrupulous, fanatically loyal Attilio Teruzzi an exemplar of fascism's New Man. Victoria De Grazia's landmark history shows how the personal was always political in the fascist quest for manhood and power. In his self-serving pieties and intimate betrayals, his violence and opportunism, Teruzzi is a forefather of the illiberal politicians of today. "The brilliance of de Grazia's book lies in the way that she has made a page-turner of Teruzzi's chaotic life, while providing a scholarly and engrossing portrait of the two decades of Fascist rule."
--Caroline Moorhead, Wall Street Journal "Original and important...A probing analysis of the fascist 'strong man.' De Grazia's attention to Teruzzi's private life, his behavior as suitor and husband, deepens and enriches our understanding of the nature of leadership in Mussolini's regime and of masculinity, virility, and honor in Italian fascist culture."
--Robert O. Paxton, author of The Anatomy of Fascism "This is a perfect book ...Its two entwined narratives--one political and public, the other personal and private--help us understand why the personal is political for those who insist on reshaping people and society."
--Azar Nafisi, author of Reading Lolita in Tehran