The Will of the People: The Revolutionary Birth of America (Paperback) 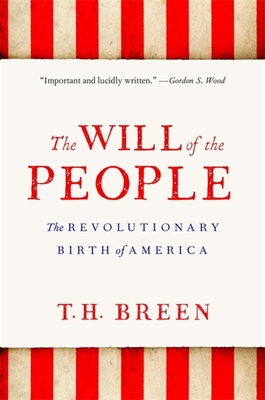 The Will of the People: The Revolutionary Birth of America (Paperback)

"Important and lucidly written...The American Revolution involved not simply the wisdom of a few great men but the passions, fears, and religiosity of ordinary people."
--Gordon S. Wood

In this boldly innovative work, T. H. Breen spotlights a crucial missing piece in the stories we tell about the American Revolution. From New Hampshire to Georgia, it was ordinary people who became the face of resistance. Without them the Revolution would have failed. They sustained the commitment to independence when victory seemed in doubt and chose law over vengeance when their communities teetered on the brink of anarchy. The Will of the People offers a vivid account of how, across the thirteen colonies, men and women negotiated the revolutionary experience, accepting huge personal sacrifice, setting up daring experiments in self-government, and going to extraordinary lengths to preserve the rule of law. After the war they avoided the violence and extremism that have compromised so many other revolutions since. A masterful storyteller, Breen recovers the forgotten history of our nation's true founders. "The American Revolution was made not just on the battlefields or in the minds of intellectuals, Breen argues in this elegant and persuasive work. Communities of ordinary men and women--farmers, workers, and artisans who kept the revolutionary faith until victory was achieved--were essential to the effort."
--Annette Gordon-Reed "Breen traces the many ways in which exercising authority made local committees pragmatic...acting as a brake on the kind of violent excess into which revolutions so easily devolve."
--Wall Street Journal