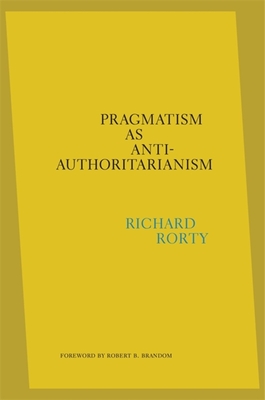 The last book by the eminent American philosopher and public intellectual Richard Rorty, providing the definitive statement of his mature philosophical and political views.

Richard Rorty's Pragmatism as Anti-Authoritarianism is a last statement by one of America's foremost philosophers. Here Rorty offers his culminating thoughts on the influential version of pragmatism he began to articulate decades ago in his groundbreaking Philosophy and the Mirror of Nature. Marking a new stage in the evolution of his thought, Rorty's final masterwork identifies anti-authoritarianism as the principal impulse and virtue of pragmatism. Anti-authoritarianism, on this view, means acknowledging that our cultural inheritance is always open to revision because no authority exists to ascertain the truth, once and for all. If we cannot rely on the unshakable certainties of God or nature, then all we have left to go on--and argue with--are the opinions and ideas of our fellow humans. The test of these ideas, Rorty suggests, is relatively simple: Do they work? Do they produce the peace, freedom, and happiness we desire? To achieve this enlightened pragmatism is not easy, though. Pragmatism demands trust. Pragmatism demands that we think and care about what others think and care about, which further requires that we account for others' doubts of and objections to our own beliefs. After all, our own beliefs are as contestable as anyone else's. A supple mind who draws on theorists from John Stuart Mill to Annette Baier, Rorty nonetheless is always an apostle of the concrete. No book offers a more accessible account of Rorty's utopia of pragmatism, just as no philosopher has more eloquently challenged the hidebound traditions arrayed against the goals of social justice.