Why They Marched: Untold Stories of the Women Who Fought for the Right to Vote (Paperback) 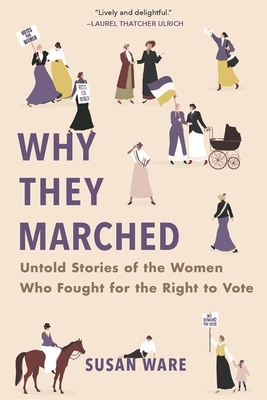 Why They Marched: Untold Stories of the Women Who Fought for the Right to Vote (Paperback)

"Lively and delightful...zooms in on the faces in the crowd to help us understand both the depth and the diversity of the women's suffrage movement. Some women went to jail. Others climbed mountains. Visual artists, dancers, and journalists all played a part...Far from perfect, they used their own abilities, defects, and opportunities to build a movement that still resonates today."
--Laurel Thatcher Ulrich, author of Well-Behaved Women Seldom Make History

"An intimate account of the unheralded activism that won women the right to vote, and an opportunity to celebrate a truly diverse cohort of first-wave feminist changemakers."
--Ms. "Demonstrates the steady advance of women's suffrage while also complicating the standard portrait of it."
--New Yorker The story of how American women won the right to vote is usually told through the lives of a few iconic leaders. But movements for social change are rarely so tidy or top-heavy. Why They Marched profiles nineteen women--some famous, many unknown--who worked tirelessly out of the spotlight protesting, petitioning, and insisting on their right to full citizenship. Ware shows how women who never thought they would participate in politics took actions that were risky, sometimes quirky, and often joyous to fight for a cause that mobilized three generations of activists. The dramatic experiences of these pioneering feminists--including an African American journalist, a mountain-climbing physician, a southern novelist, a polygamous Mormon wife, and two sisters on opposite sides of the suffrage divide--resonate powerfully today, as a new generation of women demands to be heard.